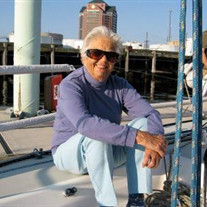 Adine Cockey Kelly of Claiborne, formally of Cockeysville, passed away peacefully in her home on September 17, 2018. She was 91. Born September 23, 1926 along with her identical twin sister, Salvadora Davidson Cockey, to John Davidson Cockey and Adine Crawford Dow Cockey, in Winston-Salem N.C. Brother, John Mills Cockey, was born June 22, 1928. All since have passed. As children, the family traveled up and down Skyline Drive due to their father being a Civil Engineer on the project. Maple Hall Boarding House, in Claiborne, was their ancestral home. Always returning home for the holidays and to help work the farm. Adine met her husband at Maple Hall, Caleb Redgrave Kelly Jr. They wed on October 26, 1948. Together they had two sons, Caleb Redgrave III and David Donaldson. From 1963 to 1973, Adine was a librarian at St. Paul’s School for Boys in Brooklynville, MD. Adine was an avid reader, she also loved sailing, dancing, playing bridge, handwork, quilting, and doll making. She and her husband traveled the world on freighters. Adine and Caleb retired to Old Point on the Maple Hall property in 1992. Adine continued a very active life. Enjoying her grandchildren and the many children of her family. Adine wouldn’t dream of missing a single sporting event. She loved the St. Michaels Library, where she volunteered from June 1993 to June 2017. Her greatest joy was her little girl, Hazel (dog), along with her large extended family and her many friends. Adine adored the little town of Claiborne. Adine is survived by her sons, Caleb R. Kelly III, wife Maureen of Cockeysville, David D. Kelly, wife Sally Jo of Royal Oak. Grandson Eric A. Kelly, great grandson Everett James Kelly of Baltimore. Granddaughters, Jessica Adine Kelly, husband Matthew Jernigan, great grandson Mason Redgrave Jernigan of Olympia, WA. Kathleen Davidson Kelly, her fiancé, Joshua Dow of Royal Oak. Adine is also survived by many nieces, nephews, their husbands and wives and their children, cousins, and great friends. Adine will be missed deeply by those who knew and loved her. St. Michaels Library was a second home to her. We kindly ask that memorial donations be made to the library. Talbot Library – St. Michaels Branch 106 Fremont Street St. Michaels, MD 21663 Burial is private.

Adine Cockey Kelly of Claiborne, formally of Cockeysville, passed away peacefully in her home on September 17, 2018. She was 91. Born September 23, 1926 along with her identical twin sister, Salvadora Davidson Cockey, to John Davidson Cockey... View Obituary & Service Information

The family of Adine Cockey Kelly created this Life Tributes page to make it easy to share your memories.