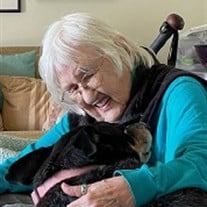 Agnes Spencer Kerr (Aggie) of St. Michaels, Maryland, peacefully departed this life at Talbot Hospice, Easton, MD, on December 16, 2021. She was 85. Aggie was born to Dr. H. Dabney Kerr and Eleanor Kerr on November 28, 1936, in Iowa City, IA, where her father was Chief of Radiology at the University of Iowa School of Medicine. She was named after Dr. Agnes Murdock who worked with her father in Hwai Yuen, China. Aggie attended the University of Iowa and Peabody Institute in Baltimore, where she studied and became an accomplished pianist. When Aggie's parents retired to St. Michaels in 1955, she adopted St. Michaels as her home base, traveling frequently, and living for some time on Cape Cod, MA. Aggie adored opera, musical theater, classical music, and all things animal. She loved any dog, especially Golden Retrievers, and had several over the years. She was very proud of the fact that she earned her SCUBA certification and had many diving trips. She loved travel as well and traveled extensively through the United States and Europe. Aggie was fiercely independent and a devoted friend. Aggie was preceded in death by her parents and her sister, Margaret Sewall Kerr Engel of Great Falls, MT. Aggie is survived by several nieces and nephews with numerous grandchildren. Interment will be private at the Kerr family plot in Raleigh, NC. Aggie received compassionate care while at Talbot Hospice, 586 Cynwood Drive, Easton, MD, 21601 and memorial contributions may be made to them. Arrangements are by the Framptom Funeral Home-Ostrowski Chapel of St. Michaels.

The family of Agnes Spencer Kerr created this Life Tributes page to make it easy to share your memories.