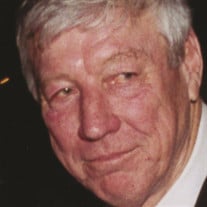 Alan Thomas Poore, Sr, “Big Al” passed away on Saturday, October 28, 2017 surrounded by his family at his home in Bozman, Maryand. He was 83. He was born in Bozman, Maryland on September 29, 1934 the son of the late William Gilbert Poore and Etta Rebecca Harrison Poore. After attending St. Michaels High school, he married Rea Jean Sweitzer on January 31, 1953 and they made their home in Bozman. “Big Al” as many knew him, started his career as a commercial watermen working side by side with his wife, Rea, in the Bay Hundred area. Later, he, along with his wife Rea, opened and operated Big Al’s Seafood Market in St Michaels for more than 34 years, where he became a friend to all who entered. He was a lifelong member of the Moose Lodge, former president of the Chesapeake Bay Seafood Industry Association (CBSIA), former board member of the MRYC and a lifetime member of the Bay Hundred Duck’s Unlimited Chapter. He loved spending time with his family, grandchildren, great-grandchildren and great-great grandchild. In addition, he was an avid gardener, decoy collector, Oriole and sports fan and an outdoorsman who loved hunting with friends and family. He is survived by his wife of 64 years, Rea Sweitzer Poore of Bozman, four children, Karen Poore Vincent and her husband Bill; Alan T. Poore, Jr. and his wife Helen; and Mark Harrison Poore all of Bozman; and Larry D. Poore and his wife Sharon of St. Michaels; five grandchildren: Johnny Scharch, Jennifer Murphy (Chuck), Cara Poore Hughes, Thomas Kyle Poore and his wife Meagan, and Charles Joshua Poore; seven great grandchildren: Kourtney, Kelcy, Jacob, Emma, Charlie, Brody and Gabe; and one great-great granddaughter Kamryn, as well as many nieces and nephews. In addition to his parents, he was preceded in death by his daughter, Kimberly Jean Poore, his brother, William G Poore, II, and his sister Loretta Poore Davenport, Funeral services will be held on Friday, November 3, 2017 at 1:00 at the Bozman United Methodist Church with the Rev. Marty Wiley officiating. Interment will follow in the adjoining church yard. The family will receive friends on Thursday evening from 5:00 to 7:00 at the Framptom Funeral Home – Ostrowski Chapel in St. Michaels as well as one hour prior to the service on Friday at the Church. Expressions of sympathy may be made in his name to the Talbot Hospice Foundation, 586 Cynwood Drive, Easton, MD 21601.

The family of Alan Thomas "Big Al" Poore Sr. created this Life Tributes page to make it easy to share your memories.