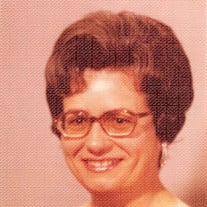 Alice Mae Johnson was born in Denton, Maryland on December 26, 1925 to John Wesley Dennis and Bessie Anna Corkran. She passed away on Thursday, July 2nd in Easton, Maryland. She grew up in Denton, Maryland and graduated from Caroline High School. In 1942 she moved to Denton, Texas with her family so her mother could get treatment for TB. While there, her father taught flying to servicemen. It was there she met Charles Rudolph Johnson, Jr, and they were married in Lawton, Oklahoma in October 1944. When Chuck was sent to France to serve in WWII, she moved to Logan, Utah to live with his parents while waiting for their first child to be born. While in Utah, they had four children: Dennis, Cathy, Charles, and Christy. Alice worked at the Bon Marche and was part owner of Tots to Teens clothing store. She was also an active member of the women's auxiliary of the DAV organization. She returned to Maryland in 1962 with her children and lived the remainder of her life in Easton. She worked for many years at the A & P, and eventually retired at the age of 79 from the DLLR and Office of Aging. Alice Mae enjoyed reading, dancing, playing cards, doing word searches, and collecting and trying new recipes. She was meticulously groomed and a very stylish dresser - she never had a hair out of place. She had many wonderful adventures traveling around, shopping, and going to concerts and fireworks with her two sisters. They affectionately called her "Dink". Attending ball games and special events for her grandchildren were high points in her life. She made several trips back to Utah to visit her daughter and family there. Alice is survived by her four children: Dennis Johnson, Crapo, Maryland; Cathy Ann Coates (Max), Millville, Utah; Charles Johnson (Carolyn), Easton, Maryland; and Christy Johnson (Darrell), Easton, Maryland, Eleven grandchildren: Casey Johnson, Kim Johnson Gibbons-Neff (Henner), Chad Coates, Christopher Coates, Nicholas Coates, Becky Coates Winn (Russell), Matthew Coates, Heather Coates Hamblin (Jake), Jennifer Coates Brown (Tanner), Jason Brinsfield, and Christopher Brinsfield, great grandchildren: Jaidance Coates, Sydney Johnson, Elisabeth Johnson, Hayden Gibbons-Neff, Grayson Gibbons-Neff, and Alden Gibbons-Neff, Two brothers: Jonathan Dennis (Wendy), Ventura, California and Laurence Dennis (Nikki) of Pleasant View, Tennessee, three nieces and three nephews. She was preceded in death by her parents, a brother, Thomas A Dennis, two sisters: Frances Ellen Porter (Vernon), Cambridge, and Betty Jane Gay (Eddie) Easton; two grandchildren, Michelle Coates and Ronald Wesley Brinsfield. Interment will be in the Denton Cemetery at a later date. Arrangements are by the Framptom Funeral Home- Ostrowski Chapel, St. Michaels, MD. (www.framptom.com)

The family of Alice Mae Johnson created this Life Tributes page to make it easy to share your memories.

Alice Mae Johnson was born in Denton, Maryland on December 26,...