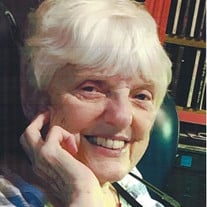 St. Michaels, Alice Jane (A.J.) Lippson passed away peacefully at her home, on April 8th, 2021. A.J. was the family's NORTHSTAR, she brightened all of our lives with her warm smile and winning ways. A.J. was born in Boston, Massachusetts where she attended Girl's Latin School. Her family moved to Virginia in the 1940's where she completed her High School career, and then attended, The University of Richmond and soon after transferred to the John's Hopkins School of Medical Illustration, there she met her husband Romeo Mansueti. A.J. and Romeo moved to Solomon's, Maryland where they began their careers in Marine Biology. They worked together doing break through studies on Stripped Bass in the Chesapeake Bay. They also began growing a family, Lisa was born in 1955 followed by Marisa in 1957, and then Christopher (deceased). Romeo died in 1963 and a few days later their son John was born. A.J. continued working on fish eggs and larvae of the Chesapeake Bay featuring her brilliant illustrations. In 1968, A.J. gathered up her family and with her mother Alice O'Brien traveled to Europe and visited family in Italy and explored Spain. In 1969 when A.J. and family returned to Solomon's, she met a new faculty member, Bob Lippson. They began a new cooperative study of the Chesapeake Bay investigating the Ecology, distribution and identification of plants and animals of the bay. Their studies resulted in a book, "Life in the Chesapeake Bay", published in 1984. Bob and A.J. loved working together and soon found that they loved each other as well. They married in 1972 in Easton and Bob's three son's; Steve, Kevin, and Jamie (deceased) joined the burgeoning brood, so far 15 grandchildren and ? Great grandchildren. A.J. joined the Martin Marietta research studies and continued her brilliant work culminating in a number of publications that received national recognition. A.J. and Bob began a new phase of their partnership when they joined the Clipper Cruise Line as Lecturers, as the ship cruised the waters of the Atlantic from Nova Scotia to the tropical waters of the Caribbean. They also began working on a book describing the flora and fauna of the Intracostal waterway from Norfolk to Key West. And then finally A.J. and Bob had a boat built and began Chesapeake Bay Cruises to share their knowledge of the bay with others. A.J.'s entire life was spent sharing with others the marvels and mysteries of the marine ecosystem- A life well lived. A Viewing will be held at the Framptom Funeral Home-Ostrowski Chapel, in St. Michaels, on Thursday, April 15, 2021 from 6:00 to 8:00PM Funeral services will be held at Christ Episcopal Church, St. Michaels, on Friday April 16th 2021 at 1:00PM. Due to COVID restrictions space in the church will be limited. Burial will follow in the Oxford Cemetery, Oxford, MD. (please visit www.framptom.com)

St. Michaels, Alice Jane (A.J.) Lippson passed away peacefully at her home, on April 8th, 2021. A.J. was the family's NORTHSTAR, she brightened all of our lives with her warm smile and winning ways. A.J. was born in Boston, Massachusetts... View Obituary & Service Information

The family of Alice Jane Lippson created this Life Tributes page to make it easy to share your memories.