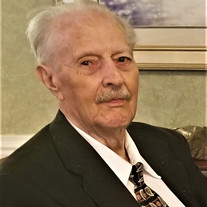 Allan Sherman passed away on Wednesday, March 31, 2021 at his home in Hurlock, MD. He was 91. He was born on February 14, 1930 in Hurlock, Maryland as the tenth child of the late Harold Sherman, Sr. and Rosetta Lyons Sherman. Allan graduated from Hurlock High School with the class of 1947. He was drafted into the United States Army in 1950 to fight in the Korean War as an Infantryman, and was honorably discharged in 1953. After his service in the Army, he studied to become an Accountant, was hired by Continental Can Company in Hurlock, and eventually was promoted to Production Control Manager. Once home from the war, Allan rekindled a high school romance with the recently-divorced Carolyn Hubbert Dillingham of Williamsburg, MD. They married on November 25, 1954 and he adopted her son as his own, Keith Allan Sherman. Allan and Carolyn got a daughter, Christine, the old-fashioned way in 1958 - by the stork! Allan enjoyed being a member of the American Legion Post 243 in Hurlock, MD, the V.F.W. Post 5246 in Federalsburg, MD, and the Moose Lodge in Easton, MD. He loved to dance with his wife and lived by the creed of "No fools = No fun!" On his 90th birthday in 2020, he was awarded the Key to the City by Hurlock Mayor Michael Henry. He is survived by his son Keith and daughter-in-law Karen of Raleigh, NC; their 3 daughters: Sara and Mike Bowdoin (with sons Conner and Rory) of Boston, MA, Becca and Pat DePoy (with daughter Kate) of Chicago, and Mary Sherman (an Electrical Engineer at SPACEX in California); daughter Christine of Hurlock, MD; and many nephews and nieces. He was preceded in death by his parents, his wife, and all of his siblings. They were Alfred, Agnes Towers, Eleanor Willin, Charles "Bill", Zora, Georgia Ennis, Ruth Williams, Harold Jr., and Roger "Monk". A funeral service will be held on Tuesday, April 6, 2021 at 11:00am at the Framptom Funeral Home in Federalsburg, MD with Pastor Joel Beiler officiating. A visitation will be held from 10:00am-11:00am prior to the start of the service. Interment will be held at the Unity Washington Cemetery in Hurlock, MD immediately following the service. In lieu of flowers, memorial contributions may be made to Coastal Hospice, PO Box 1733, Salisbury, MD 21802, or online at coastalhospice.org/make-a-donation. Services entrusted to the Framptom Funeral Home. Share memories with the family at www.framptom.com.

Allan Sherman passed away on Wednesday, March 31, 2021 at his home in Hurlock, MD. He was 91. He was born on February 14, 1930 in Hurlock, Maryland as the tenth child of the late Harold Sherman, Sr. and Rosetta Lyons Sherman. Allan graduated... View Obituary & Service Information

The family of Allan Sherman created this Life Tributes page to make it easy to share your memories.