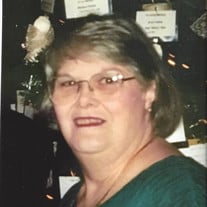 Anita Lucille Fisher passed away on Sunday, June 25, 2017 at Genesis the Pines in Easton, Maryland. She was 81. She was born on February 21, 1936 in Bethlehem, Maryland, the daughter of the late Harvey Schuyler and Cynthia Cole Schuyler. On August 8, 1952 she married to Ernest Edward Fisher Jr., he died December 28, 2014. Anita was a lifelong member of Saint Mark’s United Methodist Church where she was a member of the Ruth’s Circle, as well as a Life Member of the Lady’s Auxiliary of the Easton Volunteer Fire Department, and volunteered at the Easton Hospital for many years where she earned several service awards for the amount of time donated. Anita worked as a Crossing Guard for many years at the Talbot County Schools. Anita also worked at Bata Shoe Store and H&R Block. Anita and Ernest opened their homes and hearts to several foster children, Anita also babysat several of her nieces and nephews. Mrs. Fisher is survived by a son, Robert Glenn (Chumley) Fisher, daughter, Brenda Fisher Ramage; her grandchildren, Michele Patrick, Thomas Ramage, and Dylan Ramage; great-grandchildren Schuyler Patrick, and Xander Trout and sister, Eunice Mills. In addition to her parents and her husband, she was preceded in death by a son, Ernest Edward Fisher III, a brother Earl Schuyler and a sister Doris Massey. Funeral services will be held on Thursday, June 29, 2017 at 11:00am at the Saint Mark’s United Methodist Church in Easton with Reverend Gil Anderson officiating. A public visitation will be held from 10am-11am immediately before the service. Interment will follow at Woodlawn Memorial Park. Expressions of sympathy may be made to the Easton Fire Department, 315 Aurora Park Drive, Easton, MD 21601. Services entrusted to the Framptom Funeral Home – Ostrowski Chapel. Share memories with the family at www.framptom.com

Anita Lucille Fisher passed away on Sunday, June 25, 2017 at Genesis the Pines in Easton, Maryland. She was 81. She was born on February 21, 1936 in Bethlehem, Maryland, the daughter of the late Harvey Schuyler and Cynthia Cole Schuyler. On... View Obituary & Service Information

The family of Anita Lucille Fisher created this Life Tributes page to make it easy to share your memories.