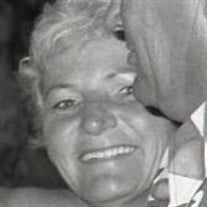 Anita Joy Whiteside passed away on January 12, 2018 at Memorial Hospital in Easton. She was 85, one day short of her 86th birthday. She died of complications of dementia surrounded by her two daughter’s Kathleen Hargrove and Karen O’Dowd, as well as Kathleen’s loving family , husband Rich, and their two sons, Matt and his wife Madeline, and Nick and fiancé, Chelsea. Born in Columbus, Ohio on January 13, 1932 she was married to John David Whiteside, the long love of her life who predeceased her. They lived in Woodlake, California, a rural California town surrounded by the beauty of the towering Sierra Nevada’s, orange and olive groves and built a wonderful life for themselves, raising both Karen and Kathleen as well as Dave’s son Kenny from a previous marriage. They also had a daughter Susan (Laws) who joined the family each summer. Ann spearheaded the formation of the local Episcopal church and was active in the church for many decades until Dave’s health declined. The family epitomized the best of rural life. Owning a boat, Ann was an accomplished water slalom water skier and the entire family spent many months in the hot summers on the houseboat that Dave built. Both Dave and Ann were active in several service groups including the Lions Club and Ann in the Garden Club. Ann, in her 40’s took up golf, and became accomplished in that, too. Foremost, they loved their children, and their community hosting huge pot luck gatherings where hundreds of friends convened on their 36 acre olive ranch. Dave was a pilot (actually a crop duster) and they also owned a small plane that they used to take them on many adventures throughout California and Mexico. Following the death of her husband and a stroke, Ann moved to St. Michael’s, Maryland, where she lived on her daughter, Kathleen’s property. She spent many happy years there, in her own cottage with her sweet miniature dachshund, Tootsie. She also attended many of the lunches at the St. Michael’s Community Center, where she met new friends and later started playing cards with those friends and her son-in-law Rich’s mother Florrie. Ann is survived by her daughters Kathleen Hargrove and Karen O’Dowd, Kathleen’s family Rich Hargrove and their two children Matt Hargrove (Madeline) and Nick Hargrove (Chelsea) as well as her son Ken Whiteside (Pam) and daughter Susan Laws (Jim) and Karen’s children Walter Kenneth O’Dowd (Ashley) and Colleen Cerritelli (Justin) , Susan’s children Jenny and Carrie and Ken and Pam Whiteside’s children Trisha Perez and Andrea Searcy. She had ten greatgrandchildren. The family will hold a private service later this spring in Woodlake, where Ann’s remains will join her beloved David’s. To share memories and condolences, please visitwww.frampton.com. In lieu of flowers donations should be made to the St. Michael’s Community Center.

Anita Joy Whiteside passed away on January 12, 2018 at Memorial Hospital in Easton. She was 85, one day short of her 86th birthday. She died of complications of dementia surrounded by her two daughter&#8217;s Kathleen Hargrove and Karen O&#8217;Dowd,... View Obituary & Service Information

The family of Anita Joy Whiteside created this Life Tributes page to make it easy to share your memories.