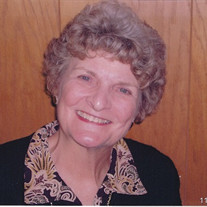 Ardath (Ardy) Mae Bridges, loving wife, mother, and long-time resident of St. Michaels, Maryland, died peacefully of natural causes on August 27, 2021 following a long illness. Ardy is survived by her loving husband Joseph Kenneth (Ken) Bridges, Jr, her children, Laurie Swaine (nee Bridges), Leslie Evans (nee Bridges) and son-in-law Evan Evans, Jr.; her grandchildren Jennifer and Julie Swaine, Evan (III), Palmer Rhys and Rhiannon Mae Evans and her sister Peg Burk. She is predeceased by her parents Gladys (nee Coleman) and Theodore Bartholomee, brothers Gordon and Eugene T Bartholomee, sister-in-law Vera Bartholomee (nee Zabel), and brother-in-law John Burk; parents-in-law Ruth (nee McQuay) and Joseph Kenneth Bridges, Sr, and sister-in-law Deborah Rosewell (nee Bridges) and her husband Howard Rosewell, Sr. Ardy was born in Baltimore, Maryland on August 15, 1932 to Gladys and Theodore Bartholomee. The family then moved to Towson, Maryland where she spent most of her childhood. Ardy attended the Lida Lee Tall School, a campus demonstration and training school for teachers at Towson State Teachers College. She later graduated from Towson High School in 1949. Ardy went on to attend Salisbury State Teachers College, earning a degree in Education in 1953. During her time there, she was chosen to be the May Queen which Ken always loves to share. After a break in her career to raise her children, Ardy returned to college studying graduate coursework at Goucher College. Ardy had a special gift working with children and, upon returning to Towson began her career as a teacher at Stoneleigh Elementary School in 1953. She also taught at East Salisbury Elementary School, Scotts Branch Elementary School in Randallstown and later returned to the classroom as a teacher's aide working with special needs students at the White Oak School in Parkville. On June 16, 1956, Ardy married Ken, whom she had met while rooming with his twin sister Deborah at Salisbury State Teachers College. After briefly living in Brooklyn Park in Anne Arundel County where they welcomed daughters Laurie and Leslie, the couple then settled in Towson. Ardy was a devoted mother and loved the opportunity to be home with her daughters when they were younger and the precious time she could spend with them. She later cherished her time with her five grandchildren. Her eyes always lit up when she was with her them. Ardy grew up and remained active in Towson Presbyterian Church. She impacted many children while volunteering as a Sunday School teacher. She also served the church as a Deacon and was active in the Women's Circle. In addition, Ardy also shared her talents as a Brownie leader with the Girl Scouts. A quiet leader, she worked hard on the projects that she became involved in. In 1987, Ardy retired from teaching along with her husband Ken and the couple moved to St. Michaels. There she was very active at St. Luke's Methodist Church, working with the Friends of St. Luke's (FOSL's), St. Luke's Women's Circle, Bible Studies and the St. Luke's Garden Committee. She was also active in the St. Michael's Women's Club. She and Ken also enjoyed a full social life with many friends and family which included travel and boating membership at the Miles River Yacht Club. They embarked on the trip of a lifetime down the Intracoastal Waterway en route to the Grand Tortugas, making many wonderful memories. In the later stage of Ardy's life, she and Ken moved the community of Londonderry in Easton where they made many friends and enjoyed cherished time with family. A viewing will be held at the Framptom Funeral Home- Ostrowski Chapel, 312 S. Talbot Street, St. Michaels, on Thursday September 2nd from 6:00 to 8:00PM. Funeral Services will be at St. Lukes United Methodist Church, St. Michaels, on Friday September 3rd at 1:00PM. In lieu of flowers, the family asks that you consider making donations to St. Luke's United Methodist Church, P.O. Box 207, St. Michaels, Maryland 21663, (Please visit www.framptom.com)

The family of Ardath Mae Bridges created this Life Tributes page to make it easy to share your memories.