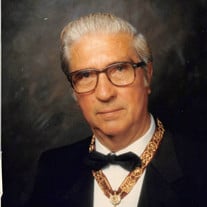 B. Hope Harrison St. Michaels B. Hope Harrison passed away at his home in St. Michaels with his family by his side on Sunday, February 25, 2018. He was 92 years old. Born on December 12, 1925 near Cordova, MD he was the son of the late Samuel F. and Alice Patchett Harrison. He graduated from Hurlock (now North Dorchester High School) in 1942. During WWII he joined the Navy in June 1944. Hope was stationed aboard a sonar and radar submarine training ship, in New London, CT for the duration of WWII. Following his discharge from active duty he moved to St. Michaels to become a Mason and later a Masonry Contractor. In 1970, he expanded his business to include General Contracting, building homes in the area. He was very active in St. Luke’s United Methodist Church, as well as Civic and fraternal organizations. These organizations include, the St. Michaels Rotary Club, The Miles River Yacht Club, the Easton Elks, The Talbot County Sanitary District, the St. Michaels Zoning Appeals Board, and the Talbot County Real Estate Tax Assessment Appeals Board. Hope was also active in the Masonic Fraternity, first serving as Worshipful Master of Granite Lodge #177 in 1971 and 1979. In 1975, he was appointed to the Grand Lodge of Ancient Free and Accepted Masons of Maryland. In 1986, he was elected as Deputy Grand Master and served as Grand Master of all Masons in Maryland in 1989 and 1990. He was also a member of the order of the Eastern Star, the Shrine, York Rite and Scottish Rite he held the position of 33 degree mason. Hope was married to his High School sweetheart Willa Jaynes for 73 and a half years. In addition to his beloved wife he is survived by a son; Jerry Hope Harrison (Dana) of Easton, two daughters; Carol Huhn (Tom) of Venice FL., and Ann Barker (Mike) of Orient, OH, eight grandchildren, 13 great-grandchildren and one great-geat grandchild. He is also survived by his three sisters; Elizabeth Bringman of Oxford, MD; Mildred Lewis of Cambridge,MD and Catherine Wright of Preston, MD. In addition to his parents Hope was preceded in death by his brothers; Lee, Earle, Charles, Elwood, Clark and Alvin and three sisters; Myrtle Walker, Helen Williams and Dorothy Wilkins. Funeral Services will be held at St. Luke’s United Methodist Church, St. Michaels on Saturday March 3, 2018 at 1:00PM where the family will receive friends on Friday from 6:00 to 8:00 PM and one hour prior to the service on Saturday. Burial will be in the Olivet Cemetery. In lieu of flowers please make donations in his memory to St. Luke’s United Methodist Church PO Box 207, St. Michaels, MD 21663 or to Talbot Hospice Foundation, 586 Cynwood Drive, Easton, MD. 21601. Arrangements are entrusted to the Framptom Funeral Home/ Ostrowski Chapel, St. Michaels, MD. To share memories with the family please visit www.framptom.com

The family of Bafford Hope Harrison created this Life Tributes page to make it easy to share your memories.

B. Hope Harrison passed away...