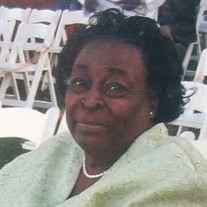 On Sunday, May 21, 2017, the Lord whispered “sweet peace” to our beloved Betty Lucille Jackson; and she was called home to be with The Lord. She departed this life at home in Jonestown, Maryland surrounded by her loving family. She was 78 years old. Betty Lucille Friend (also known as Cille, Betty-Cille, and Cilley), was born in Jonestown, on June 11th, 1938 to the late Leroy and Clara Friend. She was educated in the Caroline County Public School System. In her early years Betty gave her life to Christ. She began attending Timothy Farmer’s Memorial Church of God in Christ at the age of eight years old. Serving the Lord was her lifelong commitment. Throughout the years she has held several positions within the church and served in numerous capacities. She served on the hospitality and homecoming committees; sang with the church choir; was a member of the Celestial Gospel Singers and carried out various other duties and responsibilities within the church. She whole heartedly believed in doing “whatsoever thy hand findeth to do” Ecclesiastes 9:10 KJV. As she worked as a missionary in the church and throughout the community she worked untiringly with the traveling prayer band, the Helping Hands Committee as well as visited the sick and shut-in. She was an active participant in Sunday school, bible study, and the Young People Willing Workers (YPWW) Auxiliary. On May 27, 1961 she entered into holy matrimony with Willie Lee Jackson. Today they would have been married 57 years. They resided in Jonestown along with their children Delray, Kissy, Boo, Boonie, Nitra, and Vonnie. She was a state licensed childcare provider and foster mother providing care in her home for more than twenty-five years; and beyond that she loved and cared for so many individuals too numerous to count. Although she worked primarily as a homemaker she was also employed at Legates Cannery; the Caroline County Board of Education where she worked in food services at Preston Elementary School; and for the Preston Volunteer Fire Company for many years as a cook. Mother Jackson, as we affectionately called her, served in the ministry along side of her husband Pastor Willie Jackson. During their latest assignment at Word of Life Family Ministries located in Federalsburg, Maryland she served as: the mother of the church, the Sunday School Secretary, the director of the WOL Food Pantry and the hospitality committee. Mother Jackson executed her job as Mother of the Church with “great care” – often eyeing the ladies to make sure they had on their slips and stockings or having the occasional child sit beside her for “close watching”. She frequently reminded the members how important it was for them to be present and on time for church. She would tell them “if you can be on time for work then you can be on time for church”. She would often say “if you come late, you might miss your blessing”. Mother Jackson was compassionate and fun, but also a no-nonsense person. If you asked her something and didn’t want the truth then you asked the wrong person. Mother Jackson had a green thumb and loved different types of plants, sewing and crocheting, singing and caring for children. In addition to caring for children, she had a great passion for cooking! The kitchen was her favorite place to be and “oh-boy could she burn”. She was a hard-working woman and although she barely left the East Coast of the United States she touched the lives of many in the local community as well as around the globe. She was always serving others. As the pillar of her family Mother Jackson would often times make sacrifices for their well-being, always ensuring that they never lacked anything. Most important to her was her relationship with God. She had an unwavering faith that brought her peace. She leaves to cherish many great memories her husband Willie, five daughters Shanelle Mouring (Albert) of Preston, MD; Charita Jackson-Durosinmi (Mohammed) of Denton, MD; Lorraine Murray-Wilcox (Ronnie) of Federalsburg, MD; Anitra Gonzalez (Angel) of Preston, MD; Lavonya Jackson-Ogunwale (Ayodeji) of Federalsburg, MD. Fifteen grandchildren: Albert III, Adriane, Shayla, Gerren, Brandon, Shawna, Ashley, Shawn, Shayna, Alazha, Lamonte, Aaliyah, Adam, Amira, and Geniyah. Twelve great grandchildren: James, Jayla, Amiyah, Xavien, Albert IV, TaNizah, Jayda, Darcy, Layla, Lurenzo, Destiny and Brooklyn. Foster sons James Cephas and Timothy Moody along with several other foster children; Brother Raymond Friend (Mable) of Preston, MD and Sister Barbara Weeks (Felix) of Federalsburg; Bother-In-Laws: Alphonso Jackson of Wilmington, DE; Alvin Ross (Carla) of Harrisburg, PA; Dwayne Ross (Sherry) of Harrisburg, PA. Sister -in-laws: Lucretia Wilson (Robert) of Harrisburg, PA; Betty Jackson of Preston, MD. Honorary son J. Fritzner Desire, and a host of other nieces, nephews, cousins, friends and church family of which she loved them all. Besides her parents, she was preceded in death by her beloved son Barry L. Jackson; sister Francis Friend, sister-in-law Irene and brother-in-law Robert. She had a rich life. She was a devoted wife, loving mother, and doting grandmother. She was a wonderful example of faith and strength. She will always be remembered. – Lovingly submitted the family. Memorial Service (No Viewing) Friday May 26, 2017 6-8pm 3835 Old Denton Road Federalsburg, MD 21632 Funeral Services Saturday at 12:00 noon 100 Peachblossom Road Easton, MD 21601 (Viewing 10-12pm) Interment will follow funeral services at Coppins AME Church (Jonestown) 4381 Harmony Road, Preston, MD 21655 Repast Following Interment Preston Fire Hall 3680 Choptank Road, Preston, MD 21655 Special Thanks To: Framptom Funeral Home 216 N. Main Street Federalsburg, MD 21632

On Sunday, May 21, 2017, the Lord whispered &#8220;sweet peace&#8221; to our beloved Betty Lucille Jackson; and she was called home to be with The Lord. She departed this life at home in Jonestown, Maryland surrounded by her loving family. She... View Obituary & Service Information

The family of Betty L. Jackson created this Life Tributes page to make it easy to share your memories.