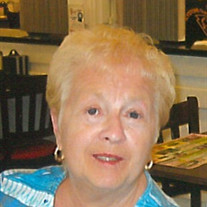 Betty Jean Shultz Smith of Greenwood, DE passed away on Tuesday, October 6, 2020 at Life Care at Loftland Park in Seaford, DE. She was 79. She was born on April 24, 1941 at home in Drums, PA the daughter of Charles and Martha (Hess) Shultz. Betty graduated from Hazleton High School with the class of 1959. She and her first husband, William Schaffer, Jr., raised their family in Lattimer Mines. She worked for many years in sewing factories, at Fabrical, and for NEP Associates in Conyngham as an Insurance Claims Adjuster. In 1995, betty married Gene Smith, of Greenwood, DE and together they made their home in Greenwood. Together, they went on several cruises including trips to Alaska, The Bahamas, and the Caribbean. They also traveled overland to the Grand Canyon, New Orleans and Branson, MO, among other places. In her free time, betty enjoyed camping, trips to the beach, reading novels, working puzzles, cooking and baking. She and her sister, Carol, enjoyed an especially clos relationship as sisters and maintained a deep friendship. Their families vacationed together many times over the years. Her greatest joy was her family and grandchildren. They especially enjoyed her famous homemade, deliciously rich and moist, chocolate cake. She attended Victory Baptist Church in Bridgeville. Betty is survived by her husband of 25 years, Gene Smith of Greenwood; a daughter, Tammy (David) Villano of Wapwallopen, PA; a son, William (Kim) Schaffer, III of Tunkhannock, PA; three grandchidlren. David (Lisa) Villano, Jr, William Schaffer, IV, and Siera Schaffer; a brother Charles (Marlene) Shultz of Ocean City, MD, and a sister Carol Giuliani of Poughkeepsie, NY, and several nieces and nephews. In addition to her parents, she was preceded in death by a grandson, Christopher Villano in 2013, and a brother-in-law, Sylvester Giuliani in 2010. The family will hold a memorial service on Sunday, October 11, 2020 at Victory Baptist Church, 16241 Sussex Highway, Bridgeville at 12:00 p.m. A viewing will be held on Thursday, October 15, 2020 at 11:00 a.m. at Harmon Funeral Home, 669 West Butler Drive, Sugarloaf, PA. Burial follow at St James Lutheran Church Cemetery in Wapwallopen. In lieu of flowers, donations may be made to your local chapter of the American Heart Association. Services entrusted to the Framptom Funeral Home – Fleischauer Chapel in Greenwood. Share memories with the family at www.framptom.com

Betty Jean Shultz Smith of Greenwood, DE passed away on Tuesday, October 6, 2020 at Life Care at Loftland Park in Seaford, DE. She was 79. She was born on April 24, 1941 at home in Drums, PA the daughter of Charles and Martha (Hess) Shultz. Betty... View Obituary & Service Information

The family of Betty Jean Shultz Smith created this Life Tributes page to make it easy to share your memories.