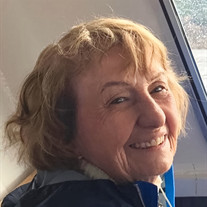 Carol Cleaveland Stewart passed peacefully the morning of Tuesday, July 14, 2020 in her 91st year. She was born in Jackson, Michigan on December 25th, 1929 – the gift of a Christmas Carol for her loving parents, John and Loraine Cleaveland. Carol met Harvey Stewart at Duke University in 1948. Upon her graduation they married and, in June 2020, celebrated their 69th wedding anniversary. After living in Europe and New Jersey, having three children, and Carol earning a MA degree in Education, they moved to the Eastern Shore of Maryland. There they found their “Camelot” at Mulberry Point, and just enjoyed their 51st year living in paradise. Carol was a teacher for 36 years at the primary level. After retiring, she worked in real estate, volunteered with English as a Second Language program. She was known for her patience, creativity, perseverance, dedication and warmth. She immersed her students in theater, music, the three R’s, culture and computer literacy. By providing her students with the first computer in her school, she introduced her young charges to future technology through educational software. One of Carol’s favorite sayings was: To teach is to touch a life forever. Carol’s life was full of joy, from her early childhood to her recent years. She delightedly embraced and shared dance, music, art, travel, volunteering, sailing, flying, and so much more with those in her life. She considered one of her greatest pleasures and accomplishments becoming a pilot at 50 years of age and flying with Harvey (her co-pilot) for 28 years. Who motivated who was a point of contention!!! Carol is survived by her husband, Harvey Stewart, three children: Shery Fetterman (& Paul) of Kansas City MO, Chris Stewart (& Laura) of Chapel Hill NC, Mark Stewart (& Millie) of Seaford DE, four grandchildren: Alexandra, David, Brendan and Brittany, and her brother, Roger Cleaveland (& Irene) of Austin TX. Carol was preceded in death by her brother, John Cleaveland. Carol was an incredible, special woman and she earned her angel wings. We are glad to have her watching over and walking beside us now. She was a kind and beautiful soul who made the world a better place. She touched the lives of so many people and left them transformed. We will deeply miss her, but she will be with us forever. Charitable donations in her memory can be made to CAF (Cure Alzheimer’s Fund – www.curealz.org) or Talbot County’s local non-profit organization BAAM (Building African American Minds – baamboys.com). Carol’s Celebration of life will be announced at a later date.

Carol Cleaveland Stewart passed peacefully the morning of Tuesday, July 14, 2020 in her 91st year. She was born in Jackson, Michigan on December 25th, 1929 &#8211; the gift of a Christmas Carol for her loving parents, John and Loraine Cleaveland. Carol... View Obituary & Service Information

The family of Carol Cleaveland Stewart created this Life Tributes page to make it easy to share your memories.