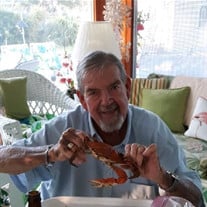 Carroll Philetus Harrison, known to all as "Phil" has retired his fishing rods due to heart disease, on February 5, 2022. Phil was born on May 2, 1942 in Baltimore, to parents Carroll and Anna Harrison where they were florists. Selling their flower shops, the family moved from Baltimore to purchase farms on the Eastern Shore. Phil farmed with his dad after attending schools in Trappe, St. Michaels and Easton. Leaving farming and returning to flowers, Phil began his career as a third generation florist with the start of Harrisons' Flowers in Easton. Acquiring the business from his parents, Phil and the love of his life Karen, grew the business. Phil's talent allowed him to create intricate designs, some of boats, planes, and cars all from flowers. He loved to be challenged in his creativity. Phil had many interests. He loved to travel and take cruises. Creating tasty treats and delicious meals he shined in the kitchen. Fondness for Classic Cars and Hot Rods began as a teenager when he was one of the founding members of the Car Club, Colonial Rodders. Hunting was a sport he enjoyed with friends. Be it a goose blind, a dove field or sea ducking. Years of shooting skeet and trap he honed his skill where he won a number of tournaments becoming a AA Champion. Love of the water, fishing was his life time passion for which he will be remembered. Earning citations for a number of species of fish, believing the next catch would be another trophy. Phil always had a boat, until his health faltered. He was a life member at the Miles River Yacht Club. There he and friends formed the Anglers. They put on fishing shows, seafood feasts and tournaments. He also was a life member of both the Talbot Rod and Gun Club and the Elks Club of Easton. His greatest reward from joining was making friends. Phil enjoyed all aspects of life, especially when he could bring joy to others. He was preceded in death by his parents, a brother James C. Harrison and sister Carol Ann Tilghman. He is survived in life by his wife Karen Black Harrison. His sister Kathryn "Kitty" Flack of West Chester, Pa., Joann Holden of St. Michaels and Basil of Easton. Mother-In-Law Betty Black, Sisters-In-Laws Dixie Haddaway and Janice Marcellas. Many nieces and nephews especially James C. Harrison and Joann Nawaz for their help and loving care. Thanks to Talbot Hospice for their gentle care that was given Phil on his final days with us. Friends may visit with the family on Saturday, February 12, 2022 at the Framptom Funeral Home-Ostrowski Chapel, St. Michaels from 2:00 to 4:00PM. Where a prayer service will be celebrated at 3:30PM. In lieu of flowers please make donations to Talbot Hospice Foundation, 586 Cynwood Dr., Easton, Md. 21601.

Carroll Philetus Harrison, known to all as "Phil" has retired his fishing rods due to heart disease, on February 5, 2022. Phil was born on May 2, 1942 in Baltimore, to parents Carroll and Anna Harrison where they were florists. Selling their... View Obituary & Service Information

The family of Carroll P Harrison, Jr created this Life Tributes page to make it easy to share your memories.

Carroll Philetus Harrison, known to all as &quot;Phil&quot; has retired...