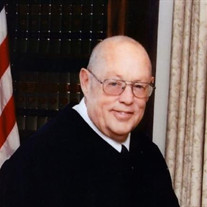 Carville D. “Don” Duncan Jr., chief judge of the Orphan’ Court of Talbot County and a longtime community leader, died of congestive heart failure Aug.2nd at his St. Michaels home. He was 76. At the time of his death, Judge Duncan was nearing the end of his third four-year term on the Orphans’ Court, which handles disputes about wills, the administration of estates, guardianship of minors and similar matters. He was appointed chief judge of the court by Gov. Larry Hogan at the beginning of his current term after serving eight years as an associate judge. He spent most of his career as a health care administrator and management consultant. He worked in both the acute hospital and long-term care fields for 30 years before establishing Health Management and Consulting LLC in 1994 and The S&H Group in 1996. Both companies engaged in health management and consulting. Judge Duncan was a past president of the Health Care Facilities Association of Maryland and chairman of its Service Corporation. He served on the board of directors of the American Health Care Association and was a Fellow in the American College of Health Care Administrators. He also served as chairman of the Board of Examiners of Nursing Home Administrators under Govs. William Donald Schaefer and Parris N. Glendening. He was deeply involved in Talbot County civic affairs. He served as president of the Easton Rotary Club and of the Isaak Walton League’s Talbot Chapter. He was chairman of the Talbot County Chamber of Commerce, receiving its 2013 award for community service. He also was a member of the county’s Republican Central Committee and served on the boards of directors of the Waterfowl Festival of Easton, the Talbot County YMCA, Maryland State Chamber of Commerce and the Republican Leadership Council. He was a 32nd degree Mason, a member of Granite Lodge #177. And he was a member of the Harbourtown Golf Club. Born April 14, 1942, in Baltimore, he was the son of the late Carville D. Duncan Sr. and Mary Elizabeth Duncan of Arnold, Md., and Bradenton, Fl. Duncan attended schools in Anne Arundel County and graduated in 1965 from the University of Maryland at College Park with a degree in business administration. He then served in the Air Force as a Captain in the Medical Services Corps. He is survived by his wife of 40 years, Jennifer Angle Duncan; his daughter Kelly Ann Duncan of Arlington, Va.; his son Michael Donovan Duncan, daughter-in-law Kimberly Duncan of Hagerstown and grandchildren Alexander Donovan and Madison LeeAnne Duncan; and a sister, Mary Elizabeth Heatwole of Warrenton, Va. Another sister, Connie Bailey, predeceased him. Services at Arlington National Cemetery will be private. In lieu of flowers, memorial donation may be made to St. Judes Children’s Hospital or the Talbot Humane Society. The family would like to thank Talbot Hospice, Mary Jane Meintzer,and Mary Camper.Brightstar’s wonderful staff: Joyce, “T,” Robin, Amber and especially Tanya Robbins for their loving and compassionate care.

Carville D. &#8220;Don&#8221; Duncan Jr., chief judge of the Orphan&#8217; Court of Talbot County and a longtime community leader, died of congestive heart failure Aug.2nd at his St. Michaels home. He was 76. At the time of his death,... View Obituary & Service Information

The family of Carville "Don" Duncan Jr. created this Life Tributes page to make it easy to share your memories.