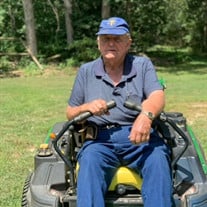 Charles Griffith of Federalsburg passed away on Thursday, October 21, 2021 at Bay Health - Sussex Campus in Milford, DE. He was 84. He was born on August 31, 1937 in Easton, Maryland, the son of the late Willy Dee Griffith. "Charlie" graduated from North Dorchester High School with the class of 1954. He was married to Patricia Fisher Griffith. She preceded him in death on March 10, 2004. He worked for E.I. DuPont in Seaford as a maintenance mechanic. He retired in 1992 with 37 years service. Charlie was a member of the Park Lane Church of God in Federalsburg for many years. In his free time, he loved to barbecue, dining out with his family and friends, and spending time with his grandchildren. In his retirement, you could usually find Charlie at Marshy Hope Hardware having a coffee with the boys and sharing his wisdom. He loved to mow lawns for his close friends and especially widows of the community; never asking for anything in return. He was a kind man who would do anything for a stranger. He is survived by two children: Tracy Harding of Federalsburg and Dave Griffith of Harrington, DE; eleven grandchildren: Ashley Hyde and her husband Charles, Tiffany Fluharty, Dustin Fluharty, Marisa Griffith, Alexis Williams, Azionna Simmons-Williams, Keelie Freudenberger, Trevor Grim Griffith, Destinee Griffith, Ariana Hurley and Samuel Robinson; two sisters: Phyllis Leggs of Seaford and Wanda Stewart of Bridgeville and one brother Gene Griffith of Cambridge. In addition to his wife and his father, he was preceded in death by a daughter Deborah Faye Fluharty, one grandchild Brandon Eric Fluharty and five great grandchildren. A celebration of Charlie's life will be held on Saturday, October 30, 2021 at 1:00 at Park Lane Church of God in Federalsburg with Bishop Ray Parsons officiating. Burial will be private at Hill Crest Cemetery. The family will receive friends from 12:00 to 1:00 at the Church. Expressions of sympathy may be made in his memory to Park Lane Church of God, Post Office Box 235, Federalsburg, MD 21632

Charles Griffith of Federalsburg passed away on Thursday, October 21, 2021 at Bay Health - Sussex Campus in Milford, DE. He was 84. He was born on August 31, 1937 in Easton, Maryland, the son of the late Willy Dee Griffith. "Charlie"... View Obituary & Service Information

The family of Charles Dee Griffith created this Life Tributes page to make it easy to share your memories.

Charles Griffith of Federalsburg passed away on Thursday, October...