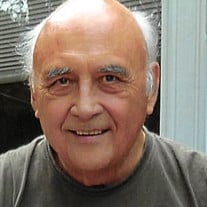 Charles P. Low of St. Michaels, passed away in his home on Tuesday, July 21, 2020. Born on February 27, 1939 in Galveston, Texas. He attended Kings Point Merchant Marine Academy in Kings Point, NY. After graduating with a Marine Engineer Degree in 1963, he sailed extensively around the world on various cargo ships as well as on Vietnam War supply ships. He earned a Chief Engineers License in 1968. He was third generation Chief Engineer in his family. He married Dorothy Krawczyk of Long Island, NY. in 1970. In 1973 he earned his M.B.A. from Tulane University, He is survived by his wife of 50 years and two sons, Eric Low (Ashley), granddaughter Brooklyn of Houston, TX; Andrew Low (Jen) granddaughters Annie and Rudy, of Highams Park, London, England; Jody C. Low, wife of predeceased brother William Hunter Low, nephew, nieces and cousins, and their families. After retiring from the sea in the early 1990s, he began a second career as an embroidery specialist. He and his wife Dorothy moved to St. Michaels from N.J. in 1997 where they operated their business, Embroidered Images, until 2018. He was proud to create and supply small businesses, local organizations, St. Michaels Township and Talbot County with embroidered logos. Many people may fondly remember seeing him walking from his home in Martingham to his shop on Fremont Street in St. Michaels wearing his neon green jacket. He had been a member of the St. Michaels Rotary, Chesapeake Bay Maritime Museum, Bay Hundred Ducks Unlimited, Miles River Yacht Club, A Board member of the Quail Hollow 1 Condo Association, and an Honorary Member of The AMC DC Chapter. A memorial service will be held at a later date. Memorial donations may be made to the Saints Peter & Paul Building Fund and the Chesapeake Bay Maritime Museum. Arrangements are entrusted to Framptom Funeral Home- Ostrowski Chapel, St. Michaels, MD. 21663 (www.framptom.com)

The family of Charles Pardue Low created this Life Tributes page to make it easy to share your memories.

Charles P. Low of St. Michaels, passed away in his home on Tuesday,...