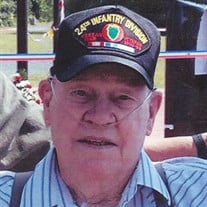 Charles Arlie "Chuck" Mullikin, Sr., of Federalsburg passed away on Saturday, December 29, 2018 at his home. He was 82. He was born in Easton on May 3, 1936, the son of the late Arlie A. Mullikin and Sarah Madge Usilton Mullikin. Chuck served his country by enlisting in the United States Army and served during the Korean War. Chuck was a member of Union United Methodist Church in Federalsburg. He also was a member of the Loyal Order of the Moose Lodge 1520 where he held many offices and a member of the Marshy Hope Rod and Gun Club. He also was involved in the Jolly Circle Horse Club and Cub Scout Troop 246 in Cordova. Chuck worked for Fox Trucking in the early 60's and retired from Chesapeake College after 28 years of service. He was a wonderful father that lived life for his four children. He and his wife Jacqueline loved dancing together. His other interests and hobbies included going fishing, hunting, horseback riding, farming, drinking coffee, and watching westerns. Chuck's wife and son fulfilled his lifetime dream of seeing the White Cliffs of Dover in England. He is survived by his wife of 53 years, Jacqueline Walter Mullikin, whom he married July 9, 1965, three daughters, Robin Lynn Whitten (Robert) of Federalsburg, Kimberly Ann Merrill Hawrylak of International Falls, Minnesota, Connie Sue Childers Lloyd (Chris) of Easton, and a son, Charles Arlie "Chuck" Mullikin, Jr. (Diamond) of Virginia Beach, VA, 7 granddaughters, Rebecca, Emily, Rya, Erin, Madi, Mackenzie, Makyla, 3 grandsons, Tyler, Dylan, Hunter, three great-grandchildren, Shane, Cameron (Cami), Gracie, two sisters, Peggy Shores (Jack-deceased) of Cordova, Dolly Bramble (D'Arcy) of Tunis Mills, three brothers, Louis Mullikin (Areana) of Easton, Temple Mullikin (Kathy) of Clovis, California, and Melvin Mullikin (Chris) of Easton, and many nieces and nephews. Funeral services will be held on Friday, January 4, 2019 at 10 a.m. at Framptom Funeral Home in Federalsburg with Rev. Joe Smith officiating. A visitation will be held from 9 a.m. to 10 a.m. Interment with military honors will be held at the Maryland Eastern Shore Veterans Cemetery in Hurlock. In lieu of flowers, memorial contributions can be made to Union United Methodist Church, 301 North Main Street, Federalsburg, MD 21632. www.framptom.com

Charles Arlie "Chuck" Mullikin, Sr., of Federalsburg passed away on Saturday, December 29, 2018 at his home. He was 82. He was born in Easton on May 3, 1936, the son of the late Arlie A. Mullikin and Sarah Madge Usilton Mullikin. Chuck... View Obituary & Service Information

The family of Charles Arlie Mullikin, Sr. created this Life Tributes page to make it easy to share your memories.