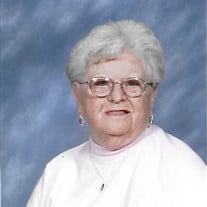 Charlotte D. Speicher of Bridgeville, Delaware passed away on Saturday, November 2, 2019, at Life Care at Lofland Park in Seaford surrounded by her family. She was 94. She was born the daughter of John H. and Ida Mae Feyerabend Donovan on June 30, 1925. On December 28, 1944, she married David C. "Everett" Speicher of Greenwood. They lived in Washington, D.C. until Everett was discharged from the army, and then moved back to the Bridgeville area where they lived until 1954 at which time they moved into their permanent home on 310 South Main Street in Bridgeville. Charlotte worked in various fields throughout the years. She was secretary for Cooperative Mills of Uhlerville for nine years in poultry research and later became secretary for USDA ARS poultry research lab in Georgetown. She held that position for seventeen years and retired on July 3, 1987. A strong believer in community service, Charlotte enjoyed being a member of the Bridgeville Lioness Club in which she once served as president and treasurer. She was also a former member of Bridgeville Fire Company Auxiliary for several years. One of her greatest passions in her later life was her involvement in the Union United Methodist Church Youth Group annual fundraiser: the Easter egg sale. Lovingly known as “the Easter Egg Lady,” Charlotte annually sold 1,000 eggs or more for several years. Charlotte was very active in politics. Her home served as headquarters for many elections for United States Senators, Representatives, and state and county candidates. In addition, she was a member of the Sussex County Republican Women’s Club where she served two four-year terms as treasurer. In addition to her parents, she was preceded in death by her husband David C. "Everett" Speicher, sister Elaine Richards and granddaughter Joanna Speicher. She is survived by two sons, Daryl E. Speicher and his wife Denise of Laurel, and David C. Speicher Jr., and his wife Kim of Seaford; four grandchildren, Danielle S. Glunt and her husband David of Laurel, David Clarke Speicher, III of Brooklyn, NY, Stacy Lynn Speicher Baker and her husband Neil of Wilmington, and Matthew B. Lank of Burbank, CA; and one great-granddaughter, Isla Lynn Baker of Wilmington. We would like to include Kerri B. Lucke and her husband Anthony of Bridgeville; and their children Anthony J. Lucke, III, Nikko T. Lucke, Alyssa C. Lucke, and Landen C. Lucke. She is also survived by a very special “grand dog” Bogart Speicher. Funeral services will be held on Friday November 8, 2019 at 1:00 at Union United Methodist Church in Bridgeville. Interment will follow at St. Johnstown Cemetery in Greenwood. The family will receive friends from 11:00 to 1:00 prior to the service. In lieu of flowers, the family requests that donations in Charlotte’s name be made to the Union United Methodist Church, 2 North Law Street Bridgeville, Delaware 19933.

Charlotte D. Speicher of Bridgeville, Delaware passed away on Saturday, November 2, 2019, at Life Care at Lofland Park in Seaford surrounded by her family. She was 94. She was born the daughter of John H. and Ida Mae Feyerabend Donovan on... View Obituary & Service Information

The family of Charlotte D. Speicher created this Life Tributes page to make it easy to share your memories.

Charlotte D. Speicher of Bridgeville, Delaware passed away on...