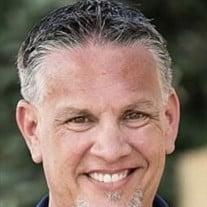 Christopher Alan Robertson of LaPlata, Maryland passed away on Wednesday, March 10, 2021 at his home surrounded by his family. He was 51. He was born on February 12, 1970 in Easton, Maryland, the son of the late Timothy Earle Robertson and Constance Lyden Sites of Seaford. Growing up in Federalsburg, Chris graduated from Colonel Richardson High School with the class of 1988. He got his start working with his uncle, Bill Lyden, at Lywood Electric and attributes his success and work ethic to him. Later he completed his electrical apprenticeship with Associated Builders and Contractors and worked as a Master electrician with the MD/DC/VA Metro. He worked at various electrical firms on the Eastern Shore before he relocated to southern Maryland. There he worked for HNTB Federal Services Corporation in Alexandria, VA as an electrical inspector. Chris enjoyed fishing and being near the water. He loved trips to the beach; especially to the gulf coast of Florida. He was a Dallas Cowboys fan and a Harley-Davidson enthusiast, and loved live music concerts. Always a "foodie", some of his favorite experiences were the St. Mary's County Oyster Festival and visiting Gordon Ramsey's Pub & Grill in Atlantic City. Above all, his greatest joy was his family and friends. He is survived by two daughters: Hayley Krushinski, PharmD and her husband Joshua Krushinski, DDS of Indianapolis, IN and Darianne Robertson of Easton, his mother Constance Sites and her husband Douglas of Seaford, DE, and his sister, Lori Colby and her husband Glenn of Salt Lake City, UT. A memorial service will be held on Saturday, March 13, 2021 at 6:00 at the Framptom Funeral Home in Federalsburg with the Reverend Keith Colona officiating. The family will receive friends from 5:00 to 6:00. Expressions of sympathy may be made in his memory at gastriccancer.org

Christopher Alan Robertson of LaPlata, Maryland passed away on Wednesday, March 10, 2021 at his home surrounded by his family. He was 51. He was born on February 12, 1970 in Easton, Maryland, the son of the late Timothy Earle Robertson... View Obituary & Service Information

The family of Christopher Alan Robertson created this Life Tributes page to make it easy to share your memories.

Christopher Alan Robertson of LaPlata, Maryland passed away on...