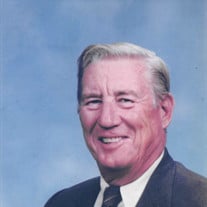 Clarence E. Wooden, Pat, was born on March 17, 1927 at St. Agnes Hospital in Baltimore, MD. To the late, Clarence and Thelma Wooden. In 1932 the family moved to Easton, MD. Over the years they lived in Queenstown, Crisfield and Ridgely. Pat graduated from Ridgely High School in 1944 along with 12 other students. In June 1944 Pat enlisted into the Army Air Corps with the intention to be trained as a pilot. The training was cancelled and he was sent as a Private First Class to Germany. On January 29, 1947 he was honorably discharged. In the fall of 1947 he became a life-long member of the VFW. During the 1950's and 60's he was an active member of the St. Michaels Volunteer Fire Dept. Station 40. Following his service in the Army Air Corps, Pat went to work for C & P Telephone Co. in Easton. He began his career as a lineman and worked his way through various positions until he was an Outside Plant Engineer at his retirement in January 1985. On July 17, 1953 Pat installed the first dial phone for the St. Michaels exchange. After retirement Pat obtained his commercial crabbing license and continued to crab for the next 20 years. On June 9, 1951 Pat married Shirley Mae Roe of St. Michaels, daughter of Levi and Mary Roe. For most of their married life they resided in St. Michaels where they raised three daughters. In his youth Pat played basketball and soccer on the Easton Town Team. He also enjoyed fishing and crabbing, and gardening especially growing his tomatoes. He helped to restore a log canoe, the Billy P. Hall, owned by Ed Morris and sailed on it in many races. In later life Pat played golf, poker with friends, was a member of Rotary, the St. Michaels Breakfast Group and ROMEO (Retired Old Men Eating Out). Pat is survived by his wife, Shirley, of nearly 70 years, his daughters: Susan W. Skelton (and William Skelton), Deborah W. Barlow, and Patricia W. Johnson (Michael D. Johnson), 5 grandchildren: Christopher W. Skelton (Andrea Skelton), Patrick W. Skelton, Sarah E. Barlow, Kevin A. Barlow, and Rachel M. Barlow; and two great-grandsons Parker W. Skelton and Dawson J. Skelton. A walk through viewing will be held at the Framptom Funeral Home- Ostrowski Chapel 312 S. Talbot Street, St. Michaels on Thursday March 4th 2021 from 6:00 to 8:00PM. Graveside service will be held at 1:00PM at the Olivet Cemetery St. Michaels, on Friday March 5th 2021. (Covid restrictions of facemask wearing and social distancing will be followed) In lieu of flowers donations may be made to the St. Michaels Volunteer Fire Department. Please visit www.framptom.com

Clarence E. Wooden, Pat, was born on March 17, 1927 at St. Agnes Hospital in Baltimore, MD. To the late, Clarence and Thelma Wooden. In 1932 the family moved to Easton, MD. Over the years they lived in Queenstown, Crisfield and Ridgely.... View Obituary & Service Information

The family of Clarence Edward Wooden, Jr. created this Life Tributes page to make it easy to share your memories.