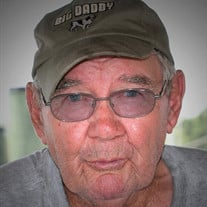 Tilghman: Clifford Lee Wilson (Big Daddy) passed peacefully at his home April 28th 2021. He was 95yrs old. He was born on Tilghman Island February 17th 1926 he was the Son of the late Captain Joseph Lee and Nannie Marie Wilson. He enlisted in the Navy during WWII; while still in High School in 1943. He received his High School Diploma with the graduating class of 2003 at St. Michaels High School. After serving the Navy he came back to Tilghman Island where he became a lifelong waterman, he retired at the age of 82. In 1949 he married the love of his life, Donna where they made their home on Tilghman Island they had four children Gail, Robbie, Greg and Lisa. They did everything together including running a couple of restaurants. He always said the best times he ever had was when they had the Skipjack Restaurant. He is survived by three children Gail Aversano, Robbie Wilson (Brenda) and Lisa Phillips (Charlie) Eight Grandchildren C.R. Wilson (Sherry), Jason Wilson (Joy), Kelly Runnels (Ed), Jamie Larrimore (Jason), Michael Kennedy (Alyssa), T.J. Aversano, Derek Wilson (Andrea) and Daniel Wilson (Karen) Three adopted Grandchildren Sandy Jones, B.J. Jones and Scott Jones Twelve Great Grandchildren Coby Wilson (Lindsay) Cohen Wilson, Jozie Wilson, Hayden Wilson, Perry Runnels, Kolby Larrimore, Miranda Larrimore, Trinity Jester, Oaklyn Kennedy, Everett Wilson, Calvin Wilson and Wren Wilson One Great Great-Granddaughter due in May He was preceded in death by his Wife Donna Wilson. His Son Greg Wilson. His Son in-law Tony Aversano and a Great Grandson Xander Kennedy. Big Daddy will always be remembered for his hard work ethic, his big smile, his big hugs and the Love for his Family and Friends. He always thought of everyone as Family and welcomed them in his home. He will surely be missed by many and truly a Legend of Tilghman island. Expressions of Sympathy may be made in his memory to St. Johns Chapel PO Box 142, Tilghman, MD 21671 or TVFD PO Box 297, Tilghman MD 21671. Celebration of Life will be at a later date. Arrangements are entrusted to Framptom Funeral Home- Ostrowski Chapel of St. Michaels. (Please visit www.framptom.com)

Tilghman: Clifford Lee Wilson (Big Daddy) passed peacefully at his home April 28th 2021. He was 95yrs old. He was born on Tilghman Island February 17th 1926 he was the Son of the late Captain Joseph Lee and Nannie Marie Wilson. He enlisted... View Obituary & Service Information

The family of Clifford Lee Wilson created this Life Tributes page to make it easy to share your memories.