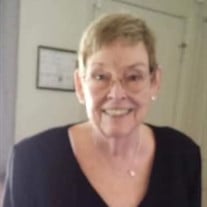 Constance Wells Collins of Hurlock passed away on Friday, February 15, 2019 at Genesis the Pines in Easton, Maryland. She was 70. She was born on April 8, 1948 in Salisbury, Maryland, the daughter of the late Hubert Wells and Betty Wells Roden. Growing up in Dorchester County, she graduated from North Dorchester High School with the class of 1966. She was married to William “Bill” Collins who preceded her in death on July 5, 2013. She was a life-long member of Galestown United Methodist Church. She worked at Thelma's, Linda's & Co. and Styles by Us in Seaford, Delaware as a beautician all of her life. She enjoyed going to church, playing bingo with her friends, and spending time with her family and grandchildren. She is survived by two children, Jeffrey Newton of East New Market, and Shelly Travers and her husband James Travers, Jr of East New Market, five grandchildren, Hunter Newton, Jordan Newton, Tyler Travers, Brandon Travers, and Amber Travers; two great grandchildren, Savannah Travers and Allison Travers. One sister, Debra McKamey and her husband Rob of Laurel, Delaware, a nephew, David Hanson Jr of Easton, Maryland, a niece, Heather Hanson of East New Market, Maryland. Two step daughters, Karen Smock and Angelia Welch of Harrington, Delaware; Three step grandchildren, Brittany Motter, Dylan Collins, and Trenton Welch. In addition to her parents, she was preceded in death by one brother, Jerome “Jerry” Wells and a sister, Colleen Wells. A graveside memorial service will be held on Saturday, February 23, 2019 at 10:00a.m. at Galestown Cemetery. The Reverend Ruth Tull will officiate. In lieu of flowers, expressions of sympathy may be made to the Framptom Funeral Home, 216 North Main Street, Federalsburg, MD 21632 to help defray funeral costs. Services entrusted to the Framptom Funeral Home in Federalsburg. Share memories with the family at www.framptom.com

Constance Wells Collins of Hurlock passed away on Friday, February 15, 2019 at Genesis the Pines in Easton, Maryland. She was 70. She was born on April 8, 1948 in Salisbury, Maryland, the daughter of the late Hubert Wells and Betty Wells... View Obituary & Service Information

The family of Constance Collins created this Life Tributes page to make it easy to share your memories.

Constance Wells Collins of Hurlock passed away on Friday, February...