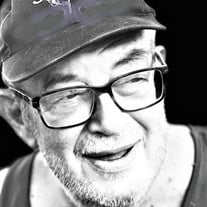 Craig S. VanLowe of Sunset Beach, NC passed away on Monday, November 8, 2021 at Lower Cape Fear Lifecare Hospice in Wilmington, NC. He was born on November 10, 1955. Craig was exceptionally proud of his son Adam, being a United States Marine. He recently took delight in making a memory with his son and grandsons, by taking Rylee and Logan to see the beach and the ocean for their first time. Craig worked for Prince George's County Communications as a dispatcher for 32 years. He was an avid lover and caretaker of animals. He will be missed by his beloved cat, Pooh Bear, who was always at his side.Craig was a super fan of major league baseball, especially the Washington Nationals. He also enjoyed watching cars make continuous left turns at NASCAR. He was passionate about sharing his political views. Once a staunch Republican, he was not demure in expressing his disdain of current GOP ideology. He constantly said, "Never again a Republican". His humor and quick wit will be missed by all. He especially enjoyed seeing how far he could push his sister, Heidi - all out of love. Now that Craig has passed into the arms of our Lord, we should remind ourselves that while this is the end of Craig's physical life on Earth, it's the beginning of an eternal and beautiful journey for him. In honor of Craig, donations can be made to St. Judes Childrens Research Hospital, which was his favorite charity. And just as Craig would end his correspondence,, social media post and conversations; "Enjoy this God-Given Day". He is survived by his son, Adam VanLowe; grandsons Rylee and Logan Duvall. His brother, Eric VanLowe, (Jalan); and sisters Vicki Hoffmaster (Joe), and Heidi Read. He was preceded in death by his wife, Tomajean. A funeral service will be held at Framptom Funeral Home in Federalsburg, MD, on Friday, November 19, 2021 at 12pm with a visitation from 11:30-12pm prior to the start of the service. Interment will be held at McKendree Cemetery in Hurlock, MD immediately following the service.

Craig S. VanLowe of Sunset Beach, NC passed away on Monday, November 8, 2021 at Lower Cape Fear Lifecare Hospice in Wilmington, NC. He was born on November 10, 1955. Craig was exceptionally proud of his son Adam, being a United States Marine.... View Obituary & Service Information

The family of Craig Spencer VanLowe created this Life Tributes page to make it easy to share your memories.