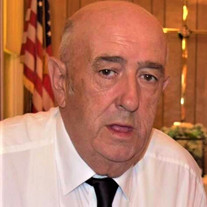 Daniel James "Jimmy" Cole, Jr., passed away December 7, 2019 peacefully at the University of Maryland in Baltimore, Maryland, surrounded by his loving family. Jimmy was the son of the late Daniel James Cole Sr. and Margaret Paul Cole. He was born in Harmony, Maryland on August 16, 1946. He was 73. Jimmy, as he was known by everyone, graduated from North Dorchester High School with the class of 1965. After graduating from high school, Jimmy went straight into the workforce. He began working at Maryland Plastics with his mother and father, as well as Jones Implement (Atlantic Tractor), and many local farms. He later began his career at Cambridge Wirecloth and retired after 35 years. Once in retirement, to keep busy, he joined the Dorchester County Board of Education where he worked as a janitor for 10 years. He was an active lifetime member of the Eldorado-Brookview Fire Company with 55 years of service. Jimmy held numerous positions throughout his years. At the time of his passing, he was Fire Deputy 26-1 and Chaplain. Jimmy loved to be outside, even if it was pouring down rain. When you drove by you could find him tending to his marigolds and tomato plants, or cutting the grass to make sure it was at the right height. Jimmy is survived by his loving wife of 50 years, Brenda Cole, daughter, Victoria Wright (Dan) of Parkville, MD, son, Wilbert Cole (Lauren) of Hurlock, MD, three grandchildren, Riley, Jarrett (JD), and Cole, brother Paul Cole of Rhodesdale, MD, a niece, Niki Cordrey, and two nephews, David Cordrey, Jr., and Anthony "AJ" Massey, who were like his own children, as well as many other nieces and nephews. Jimmy is preceded in death by his parents and two brothers, Donald "Donnie" Cole and Joe Paul. A funeral service will be held on at 1pm on Thursday, December 12, 2019, at the Eldorado Brookview Fire Department with Pastor Courtland Copper officiating. The family will receive friends from 11am-1pm prior to the start of the service. Interment will be held at Galestown Cemetery immediately following the service. In lieu of flowers, donations can be made in his name to the Eldorado-Brookview Colunteer Fire Company, 5752 Rhodesdale Eldorado Rd., Rhodesdale, MD 21659. Services entrusted to the Framptom Funeral Home. Share memories with the family at www.framptom.com.

Daniel James "Jimmy" Cole, Jr., passed away December 7, 2019 peacefully at the University of Maryland in Baltimore, Maryland, surrounded by his loving family. Jimmy was the son of the late Daniel James Cole Sr. and Margaret Paul Cole. He was... View Obituary & Service Information

The family of Daniel James Cole, Jr. created this Life Tributes page to make it easy to share your memories.