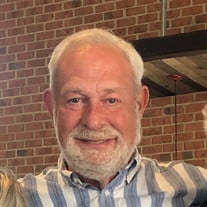 David Bartlett Bishop, 73, of Easton, passed away on January 12, 2021 at University of Maryland Charles Regional Medical Center in LaPlata, Maryland. David was born in Easton, Maryland to the late Virgil Bartlett Bishop and Elsie Kathryn Carpenter on February 26, 1947. David spent his childhood in Oxford, Maryland where he was known as one of the "Oxford Boys". Living in Oxford was one of the joys of his life. He enjoyed playing baseball in the church yard as well as basketball and scouts. His lifelong friendships from the early years were always special to him and he always enjoyed attending the "Oxford Boys" reunions. He graduated from Easton High School in 1965 and went on to receive his Associates degree from Wesley College. Several years later, he received his B.S. degree in business management with a minor in journalism from High Point University in North Carolina. David loved journalism and photography and was involved with the yearbook committee at Easton High, Wesley and High Point. After graduating from college, David was employed with Jefferson Pilot Life Insurance Company in Greensboro, North Carolina where he worked for 6 years. In 1970, he started his own business, Competition Photos Inc., which he operated for most of his adult life. In 1976, after his father became ill, David returned from North Carolina and took over the family business - The Hobby Horse Audio Visual Services Inc. He owned and operated the Hobby Horse as well Competition Photos, until he sold the Hobby Horse in 2006. In 2004 David founded East Coast Drag News, LLC, where he wrote various stories and published photos about the drag racing industry - one of the passions of his life. David semi-retired in 2010 and held various jobs up until his death. His love for drag racing began in 1966 when he won the stock eliminator at Delmar US 13 Dragway with his 1960 Ford Falcon. He then partnered with his cousin Tim in a 1959 Chevrolet called "Hey Man". The next car they had was a 1957 Chevy that won class at NHRA 1969 Nationals in Indiana. His passion for racing and photography continued throughout his life. The friendships he made through his involvement in drag racing held a special place in David's heart. He will long be remembered for being a fixture at many racing events, his trusty camera in tow. David was a member of the High Point Jaycees, Easton Rotary Club, Waterfowl Festival Commission, Talbot Chamber of Commerce Board, Economic Development Board, and Downtown Merchants of Easton. David was elected Easton Rotarian of the year in 1998 and was inducted into the Drag Times National Racing Hall of Fame in 2006. As part of his Rotary membership, David was chairman of the Easton Rotary International Youth Exchange. The exchange program enabled him to host 16 foreign exchange students over the years. These students became a second family to him and continued to be a big part of his life. He married the love of his life - Louise Bullock Bishop - on August 11, 1979 in Grasonville, Md at his parents' home on Greenwood Hall Creek. He also became the stepfather to Bryan and Angie Nagel who he raised as his own. David is survived by his wife, his son Bryan Nagel (Lisa) of Davidsonville, Md, his daughter Angela Nagel of Annapolis, Md, his sister Kathryn Bishop of Ft. Lauderdale, FL as well as four grandchildren including Callie Nagel, Harrison McCormick and Logan and Jordan Wheeler. He is also survived by several cousins, nieces, and nephews. He loved his family above all else. He also loved his yorkie, Coco. David was a big sports fan, loved to tell stories, always shared his life, and enjoyed helping others. He had an outsized heart and compassion for all. There was no better friend then David Bishop. David touched many lives and will be profoundly missed by many. Graveside services will be held at 11:00AM on Saturday, May 8, 2021 at the Oxford Cemetery, due to COVID restrictions,mask wearing and social distancing will be observed. In lieu of flowers, charitable contributions can be made in David's name to "For All Seasons", forallseasons.org, Talbot Humane Society, talbothumane.org or "Court Appointed Special Advocates (CASA) for Children", casamidshore.org.

The family of David Bartlett Bishop created this Life Tributes page to make it easy to share your memories.

David Bartlett Bishop, 73, of Easton, passed away on January...