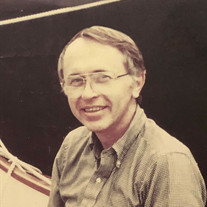 He loved family, books, and boats. He was quiet and kind, self-effacing but with a dry wit that cracked up his family and caregivers until the end. “I know one thing,” he said upon being told that he had a few weeks to live, “I don’t want to die in the Days Inn.” And so we brought him home from Baltimore where he’d gone for AML treatments these last 15 months. He got to look out onto San Domingo creek and feel the breeze, though the ospreys wouldn’t cooperate and return to their nest early. He spent his last few days in Talbot Hospice, surrounded by his beloved wife of 26 years, Sherry Jeffery, his daughter Clara Jeffery, son Charles Jeffery, and stepdaughters Carrie Azzolino and Holly Vensor. David Joseph Jeffery was 82. As a writer and editor, he would have hated the silted conventions of a death notice. But as a lover of history, he would have acquiesced to the need to leave a trail between the past and the future. David was born on June 2, 1937, in Chicago, Illinois, to Jean Patterson Jeffery and Walter Joseph Jeffery. They came from Calumet, a hardscrabble town in the UP of Michigan. Walter put himself through night law school and went on to head the USF&G insurance company. Their elder son, Samuel, died in infancy. David would go to the Lawrenceville School, and then Yale, where he majored in literature, was the Managing Editor of The Yale Record, the oldest humor magazine in America, and graduated in 1960. After serving time in the Army, he received a Masters Degree in Writing Seminars from Johns Hopkins University, and then went on to a career of writing and editing, mostly at National Geographic. He took part in some of its glamour—a beloved photo shows him clutching an Emperor penguin in Antarctica. But mostly he took pride in mentoring younger staffers, who recall him as a kind colleague and teacher who helped them hone their prose. His daughter followed in his journalistic footsteps while his son embraced his love of sailing. David had fallen in love with the Eastern Shore when the Army based him in Salisbury, and he imparted that love to his kids, his wife and her daughters, and to his five grandchildren: Ashley and Reese Vensor, Jack and Milo Jeffery, and Hank Azzolino. His first wife, Pamelia Colton Barratt, shares in their loss; their oldest child Kingsley Colton Jeffery died in infancy. His sons- and daughter-in-law—Scott Vensor, Mike Azzolino, Chris Baum, and Susannah Walker also mourn his passing. David and Sherry shared a love of travel and a pride in community work; in St. Michaels he diligently and tirelessly volunteered his time to the St. Michaels Rotary, Christmas in St. Michaels, and serving as a docent at Christ Church. A life-long Democrat, he loved his bipartisan book club. He will be interred at Christ Church, St. Michaels Parish columbarium; a celebration will happen some months from now. The totality of a life—and the love and heartbreak left behind—cannot be captured in a death notice. But this poem from W.S. Merwin, “For the Anniversary of My Death,” comes as close as anything ever will: Every year without knowing it I have passed the day When the last fires will wave to me And the silence will set out Tireless traveler Like the beam of a lightless star Then I will no longer Find myself in life as in a strange garment Surprised at the earth And the love of one woman And the shamelessness of men As today writing after three days of rain Hearing the wren sing and the falling cease And bowing not knowing to what In lieu of flowers, memorial donations can be made to: Talbot Hospice, 586 Cynwood Drive, Easton, MD 21601 or to St. Michaels Rotary Foundation, PO Box 394, St. Michaels, MD 21663.

He loved family, books, and boats. He was quiet and kind, self-effacing but with a dry wit that cracked up his family and caregivers until the end. &#8220;I know one thing,&#8221; he said upon being told that he had a few weeks to live, &#8220;I... View Obituary & Service Information

The family of David Joseph Jeffery created this Life Tributes page to make it easy to share your memories.

He loved family, books, and boats. He was quiet and kind, self-effacing...