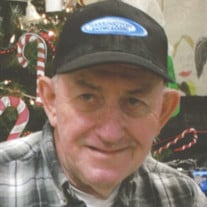 David Thomas Nickerson, Jr, "Tommy" went to be with the Lord on Thursday, September 30, 2021, surrounded by his loved ones, at his home in Greenwood. He was 71. Tommy was born on April 10, 1950 in Chestertown, MD, the son of the late David Thomas Nickerson, Sr., and Virginia Mae Willis Nickerson of Barclay, MD. He graduated from Queen Anne's County High School with the class of 1968. Tommy was a seasoned baseball player and was once scouted by the Baltimore Orioles in his hometown. Following the advice of his father, he found a job and declined the offer (against his wishes) from the Orioles. He married the love of his life, Pauline (Polly - as he proudly called her) Webb Nickerson on July 20, 1979. They made their home in Greenwood. She preceded him in death on March 11, 2013. Tommy, or "Hot Dog" as he was known, worked for RAPA Scrapple in Bridgeville for most of his working career where he retired in 2008. He earned his nickname from his co-workers because of his numerous hot dog purchases faithfully each week. In his spare time, Tommy loved horses and harness racing. You could often find him at the track at the Harrington Casino and Raceway. He was also an avid baseball fan, rooting for the Baltimore Orioles. He enjoyed watching his grandsons play as well. Tommy also coached little league baseball for a few years. He enjoyed the time he played on the men's adult modified fast pitch softball teams in Bridgeville playing the positions of short stop and pitcher. He is survived by four children: Debra Prettyman (Joe), Paul R. Webb, Jr. (Jamie), Robert Nichols (Wanda) and David Haymond, all of Greenwood; seven grandchildren: Joey Prettyman (Kristina), Amber Petrone (Chris), Kaylyn Kemp (Marshall), Paul Webb, III, and Scott Haymond, all from Greenwood; Rusty Emory (Sara) from Bridgeville, Ashley Nichols; eight great grandchildren, and one sister, Judy Dagenale of Rock Hall, MD. He is also survived by his caregivers Lisa Furber, Daniel Williford and Lisa Mae Timmons, all of which he loved dearly! A graveside funeral service will be held on Monday, October 4, 2021 at 11:00am at Saint Johnstown Cemetery in Greenwood. Donations may be made in Tommy's memory to the Delaware Hospice organization at 100 Patriots Way, Milford, DE 19963. Services entrusted to the Framptom Funeral Home - Fleischauer Chapel in Greenwood. Share memories with the family at www.framptom.com

David Thomas Nickerson, Jr, "Tommy" went to be with the Lord on Thursday, September 30, 2021, surrounded by his loved ones, at his home in Greenwood. He was 71. Tommy was born on April 10, 1950 in Chestertown, MD, the son of the late David... View Obituary & Service Information

The family of David Thomas Nickerson, Jr created this Life Tributes page to make it easy to share your memories.

David Thomas Nickerson, Jr, &quot;Tommy&quot; went to be with the Lord...