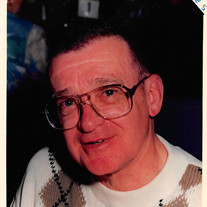 Dean R. Sanders passed away at home surrounded by family on March 11, 2020 in McDaniel, Maryland. He was comforted in his final days by the constant companionship of his daughter Debbie along with many visits from the rest of his children and grandchildren. Dean was born in Millville, New Jersey to Herbert and Pearla Sanders on August 24, 1929. As a young man he was an active Boy Scout achieving the distinction of Eagle Scout. Dean graduated from Millville High School in 1946 and furthered his secondary education by attending Dean Academy in Franklin, Massachusetts. Upon graduation, he matriculated to Lafayette College in Easton, Pennsylvania graduating in 1951 with a degree in geology. Dean was drafted into the United States Army and served in Europe until his honorable discharge. Dean spent his entire working life at The Espoma Company. He transformed the small company his father started into the lawn and garden industry’s leading organic plant food manufacturer. Dean was President of the corporation from 1980 until 2003 when he turned the leadership over to the next generation of family. During his tenure he dedicated himself to the success of The Espoma Company, often stating when asked what he did for entertainment that “his avocation was his vocation”. While Dean stayed involved with the management of Espoma his entire life, he and his wife, Karolyn, began traveling the world and visited over 35 countries after relinquishing his presidency. Surviving Dean are his children Debbie Royer and husband Kurt of Westminster, MD, Ken Stoner and wife Mia of Philadelphia, PA and Sandra Watkins and husband Glenn of Sewell, NJ, and grandchildren Erica and Ryan Royer, Jillian and Grant Watkins. Also surviving is his niece Noel Brunner and husband Serge, his niece Jean Michelle Rennie and husband Bill, his nephew Stephen John Hruza and wife Susan. He was predeceased by his parents, his wife Karolyn E. Sanders, and his sister Jean Sanders Hruza. Funeral arrangements are being handled by Framptom Funeral Home by the Coales with private graveside services at Oxford Cemetery, MD. Memorial donations may be made to Lafayette College, 730 High St, Easton, PA 18042. Dean R. Sanders

Dean R. Sanders passed away at home surrounded by family on March 11, 2020 in McDaniel, Maryland. He was comforted in his final days by the constant companionship of his daughter Debbie along with many visits from the rest of his children and... View Obituary & Service Information

The family of Dean Ronald Sanders created this Life Tributes page to make it easy to share your memories.

Dean R. Sanders passed away at home surrounded by family on March...