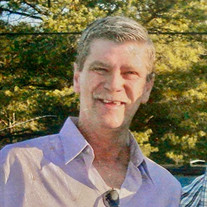 Donald Frank "Jr" Towers Jr. was a loving husband, father, grandfather, brother & friend. He left this world suddenly on Monday, April 25, 2022 at the age of 63. Jr was born at Easton Memorial hospital on November 25, 1958, to the late Joan and Donald Towers Sr. They raised him in Federalsburg, where he was a wild child. In his early days, Jr enjoyed running around playing with his sisters, cousins and friends. His friend Chris Parks remembers him being the safety patrol officer in school, and he says he was always strict. He loved playing little league, and continued to play men's softball as he got older. He also loved working on old cars and even was going to restore one, but realized the job was too much! He enjoyed going out to Mowbray's creek with his sisters and cousins, with packed lunches and they would drive around. Jr also loved to fish when he was young, and continued to do it with his children and grandchildren throughout his life. He would go crabbing with the Misters when he was little, and then would take his wife and children to the Lewes fishing pier for overnight fishing trips when he got older. Jr met the love of his life Barbara in June of June 1994, and they married on November 22, 1995. They were married for 26 beautiful years before he passed. Jr is survived by his wife, his children: Joshua Ryan Towers, Cassie Griner, Albrei McGee, Jason Towers, Colt Towers and Donnie Towers, his sisters: Kathy(Lou) Towers-Solis and Linda Hare (her husband Larry passed in 2021), his 4 grandchildren JJ Towers, Phoenix Towers, Austin Guerrieri and Tripp Griner, and several nieces and nephews including Trevor Hare and Olivia Joan Cullum. He will be missed by several other family members and friends. A Funeral Service will be held at the Framptom Funeral Home, Federalsburg, on Monday, May 2, 2022 at 1:00PM, where friends may visit with the family from 12:00 until 1:00PM. Burial will follow at the Hillcrest Cemetery.

Donald Frank "Jr" Towers Jr. was a loving husband, father, grandfather, brother & friend. He left this world suddenly on Monday, April 25, 2022 at the age of 63. Jr was born at Easton Memorial hospital on November 25, 1958, to the late... View Obituary & Service Information

The family of Donald F. Towers, Jr. created this Life Tributes page to make it easy to share your memories.