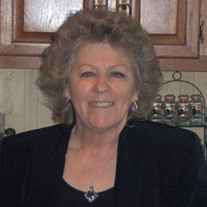 Obituary: Dorothy “Dotty” Mae Dubiel Dateline: Federalsburg, MD Dorothy Mae Dubiel, affectionately known as “Dotty”, passed away on Monday, September 4, 2017 at her home in Federalsburg, Maryland. She was 71. She was born on February 18, 1946 in Baltimore, MD, the daughter of the late Joseph Lorenz, Sr. and the late Laverne Fenwick Lorenz. She was a 20 year member of the VFW Ladies Auxillary in Federalsburg, MD Post 5246. She enjoyed playing cards, going to the casino, and spending time with her family. She is survived by her husband of 52 years, Howard Dubiel, a daughter, Becky Stowers and her husband Gene, five grandchildren, Ricky Rodgers (Karen) of Ridgely, Crystal Rodgers (Brad) of Trappe, Lindsey Rodgers of Greensboro, Kelsea Dodd of Greensboro, and Shelby Dodd (Michael) of Greensboro, three great-grandchildren, Brantley Nichols, Aubree Allen, and Kaleb Backer, two brothers, Victor “Sonny” Lorenz of Florida, and Joseph Lorenz Jr. of Linthicum, and a sister, Gloria Dunn of Texas. She is preceded in death by her other two sisters, Mary Fisher and Joann Lorenz. A celebration of life will be held on October 1, 2017 at the Federalsburg VFW at 1:00pm.

The family of Dotty created this Life Tributes page to make it easy to share your memories.