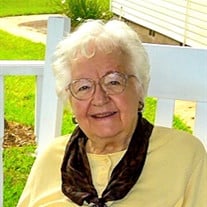 Dorothy Beatrice Hicks, age 96 of Mt. Dora, Florida passed away on February 16, 2020 of natural causes. Dorothy was born in Camden, New Jersey on April 27th, 1923 and graduated from Woodrow Wilson High School in 1941. Afterwards, during the war years, she worked as a telephone operator for Bell Telephone. Eventually in 1944 on April 8th she married her high school sweet heart, John Peter Hicks. Inseparable for 32 loving years, they could only be divided by his premature death in 1977. Being forever devoted to her husband, she never remarried. Dorothy and John raised their family in Bowie, MD before her retirement to Mt. Dora, FL. Dorothy was an active member of the United Methodist Church of Bowie, MD during those years. Dorothy is survived by her five children, Donald Hicks of South Kent, CT, Geoffrey Hicks of San Francisco, CA, Scott Hicks of Stafford, VA, Holly Hicks Bruns of Mt. Dora, Fl and Rodger Hicks of Sharon, CT. Dorothy's life was forever in pursuit of all things creative, adding her artistic passions to everything she touched, a devotion which subsequently inspired the artistic sensibilities of all of her 5 children, 7 grandchildren and 2 great grandchildren. She was an avid puppeteer, gardener, water-colorist, cake decorator, and Halloween outfit designer. Very few opportunities, such as holidays or birthdays, would pass without her full creative contributions being engaged. In her final years she was inspired artistically by butterflies. While living at her assisted living facility in Florida, she had an epiphany out her bedroom window while watching a butterfly. She soon leveraged this deeply spiritual experience into a line of personal hand colored greeting cards she lovingly gave away. Dorothy also passed onto her children a contagious appreciation for both the Grand Mystery behind living in a spiritual world, and the power that a simple act of kindness can have on another human being. Funeral services will be Monday, February 24th, 2:00 pm, at the Maryland Veteran's Cemetery in Hurlock, Md. She will be buried with her husband John. In lieu of flowers, Memorial donations my be given to the Edgewater Nursing Home, 300 Brookfield Ave., Mt. Dora, Florida 32757 or the American Diabetes Association at Home | ADA

Dorothy Beatrice Hicks, age 96 of Mt. Dora, Florida passed away on February 16, 2020 of natural causes. Dorothy was born in Camden, New Jersey on April 27th, 1923 and graduated from Woodrow Wilson High School in 1941. Afterwards, during the... View Obituary & Service Information

The family of Dorothy B Hicks created this Life Tributes page to make it easy to share your memories.