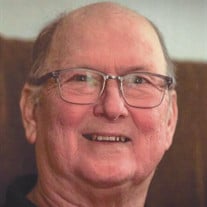 Duane Walter Anthony passed away on Friday, January 8, 2021 at his home in Harrington, DE surrounded by his family. He was 73. He was born on April 21, 1947 in Milford, De. He was the son of the late James F. Anthony and Elnora Fowler Anthony. He graduated from Greenwood High School, class of 1965 and later graduated from Goldey Beacom College in 1967, earning a degree in Accounting. He later served in the United States Air Force. Duane married the love of his life, Joyce Ann Gerardi on April 20, 1968. They made their home in Harrington. He was such a hardworking man and was a great provider for his family. He began his career at Libby's in Houston, De. From there he went to work for O.A. Newton in Bridgeville, De. He loved accounting but also loved to work with people, so he started working in sales. He was an assistant manager in sales at CASE, Milford, manager at Wright's Auto Parts, Bridgeville, and then opened a family business, Anthony's Enterprises, along with his son, Brock. Before he became ill and had to retire, he also worked at Bridgeville Auto Parts. He loved to tinker in his garage on lawn mowers and had a big love of cars his entire life. He was a communicant of St. Bernadette Catholic Church in Harrington. He was a man of many interests. He loved all sports. He played basketball in high school and was a big fan of racing as his children grew up. He loved spending time with family and watching his children and grandchildren play their favorite sports, share their favorite stories, Sunday dinners at the table, and just being together. He loved trips to Lancaster and family trips camping. He was preceded in death by his mother and father, James F. Anthony, and Elnora Fowler Anthony. He is survived by his wife of 52 years, Joyce Ann Gerardi Anthony, of Harrington; Children: a daughter, April Wright and her husband Greg, a son, Brock Anthony and his wife Evolyn, all of Harrington; five grandchildren: Austin Wright and his wife Cassidy, Trey Wright, Alyssa Anthony, Cameron Anthony and one great grandchild on the way; one sister, Dolores Schrock and her husband Robert; several nieces and nephews, and a very special person in his life that was there when he needed absolutely anything, his best friend and brother-in-law, Steve Willey. The family will receive friends on Tuesday, January 12, 2021 from 6:00 to 8:00 at the Framptom Funeral Home – Fleischauer Chapel in Greenwood. Funeral services and interment will be private. Expressions of sympathy may be made to the St. Bernadette Catholic Church, 109 Dixon Street, Harrington, DE 19952 or to the National Kidney Foundation at www.kidney.org.

Duane Walter Anthony passed away on Friday, January 8, 2021 at his home in Harrington, DE surrounded by his family. He was 73. He was born on April 21, 1947 in Milford, De. He was the son of the late James F. Anthony and Elnora Fowler Anthony. He... View Obituary & Service Information

The family of Duane Walter Anthony created this Life Tributes page to make it easy to share your memories.