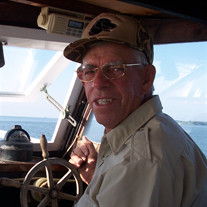 Earl W. Hughes, Jr. Salisbury, Earl W. "Sonny" Hughes Jr. of Salisbury, formerly of Bozman, passed away peacefully on Friday January 14, 2022 with his family at his side at age 85. Sonny was born on April 4th, 1936 in Dorchester County to the late Earl Ward Hughes and Hazel Meekins Hughes. He attended grammar school on Taylors Island and graduated from Cambridge High School. He then began working on the water. On November 27, 1964 he married the former Anne Hambleton of Bozman, they made their first home in St. Michaels. Later he took a position with the Maryland State Highway where he worked for 9 years. Sonny then returned to his passion, working on the water aboard the "Miss Holly Kris" until his retirement. As a member of Bozman United Methodist Church, Sonny served on many committees and was always willing to lend a hand. Visitation was his ministry. He loved to share his stories, tell his jokes, and spread a little joy. In addition to his wife Anne, he is survived by two daughters, Holly Hammon (Trevor) of Bozman and Krista Hughes of Salisbury. Grandchildren Colby Hammon and Madison Hammon (Ronnie), great grandchild Raelynn Hammon. Granddaughter by love Jennifer Simmons (Suprel), great grandchildren by love Tay Simmons, Suprel Simmons, Jr., Mekhi Simmons, and Kingston Simmons. Brother in-law P.T. Hambleton (Tamara) of Bozman, sister in-law Faye Hughes Holmes of Easton. In addition to his parents, he was preceded in death by two brothers and four sisters. A viewing will be held on Saturday January 22, 2022 from 12:00 PM until 1:00 PM at the Bozman United Methodist Church followed by the funeral service at 1:00 PM. Burial will be in the Broad Creek Methodist Cemetery immediately following the service. In lieu of flowers memorial donations may be made to the Bozman United Methodist Church, 7988 Bozman Neavitt Road, Bozman, MD 21612 or to Coastal Hospice, P.O. Box 1733, Salisbury, MD 21802-1733. The family would like to thank the Coastal Hospice Team for their exceptional care and guidance. Sonny lived a life of faith, family, and travel. He was a fun-loving guy who will be truly missed.

Earl W. Hughes, Jr. Salisbury, Earl W. "Sonny" Hughes Jr. of Salisbury, formerly of Bozman, passed away peacefully on Friday January 14, 2022 with his family at his side at age 85. Sonny was born on April 4th, 1936 in Dorchester County to... View Obituary & Service Information

The family of Earl Ward Hughes, Jr created this Life Tributes page to make it easy to share your memories.