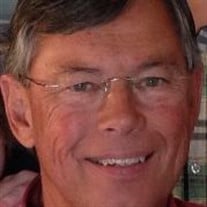 Edward Dobson Harrison passed away at University of Maryland Shore Medical Center at Easton on June 22, 2017. He was 69 years old. He was born on July 17, 1947 in Easton, Maryland, the son of the late James Dobson Harrison, Jr. and Elizabeth McClyment Harrison. He graduated from Saint Michaels High School in 1965 before joining the Air Force as a Civil Engineer. While serving his country, he was awarded the Air Force Commendation Medal for his outstanding initiative and devotion to duty to the mission in Southeast Asia as part of the Red Horse Unit. He was Honorably Discharged from the Air Force in 1969. After serving in the Air Force, he worked at the Star Democrat for many years before opening Budget Barn Furniture Store, which he owned and operated for over 30 years. He married the love of his life, Bonnie Harrison, on September 3, 1966. They loved to travel with their family and believed in living life to the fullest. They raised three daughters in Trappe, MD, moved to Easton and finally resided on Tilghman Island. He dedicated his free time to serving the community. He served as a member of the MSSA, volunteered at Talbot Hospice during the festival of trees for many years and served as a distinguished member of the Trappe Lions Club where he was awarded the highest honor, the Melvin Jones Fellow Award. He loved to travel and spend time with his grandchildren. He enjoyed watching them play sports, taking them fishing and being on the water. He is survived by his wife, Bonnie Harrison, his daughters, Kimberly Harrison of Secretary, Tiffany Harrison of Tilghman, Kellie Knopp and her husband David of Easton, his grandchildren, Haley Howerton, Harrison Knopp, Bennett Knopp, and Caine Knopp, and a brother James “Tommy” Harrison. Funeral services will be held on Wednesday, June 28, 2017 at 1:00PM, at the Maryland Eastern Shore Veterans Cemetery in Hurlock, MD. In lieu of flowers, please send donations to Trappe Lions Club, P.O. Box 427, Trappe, MD 21673. Services entrusted to the Framptom Funeral Home – Ostrowski Chapel in Saint Michaels. Share memories with the family at www.framptom.com

Edward Dobson Harrison passed away at University of Maryland Shore Medical Center at Easton on June 22, 2017. He was 69 years old. He was born on July 17, 1947 in Easton, Maryland, the son of the late James Dobson Harrison, Jr. and Elizabeth... View Obituary & Service Information

The family of Edward Dobson Harrison created this Life Tributes page to make it easy to share your memories.

Edward Dobson Harrison passed away at University of Maryland...