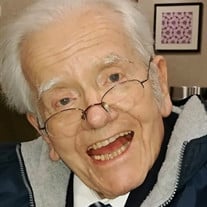 On Sunday, September 1, 2019, Edward Francis Seibert, loving husband and father of 6 children, passed away at the age of 89. Edward was born on August 1, 1930 in Bronx, NY to Walter and Ruth (Clow) Seibert. He was a cum laude graduate from Iona College in 1953, US Army Special Forces, 82nd Airborne in 1954 and received his law degree from the Columbia School of Law, Catholic University in 1960. He worked as a States Attorney in Baltimore City and in Baltimore County, maintaining a private law practice throughout. After moving to Easton in 1999, he served on the boards of several local community organizations. Edward embraced life with passion and drive not only for his family, but also in his efforts to help those less fortunate, being active in the Knights of Columbus and the St. Vincent de Paul Society. He was also a gifted artist and modeler with a lifetime love of airplanes. Edward is preceded in death by his wife of 63 years, Barbara Ann (Hagadorn) Seibert; daughter Mary Seibert Hobbs and grandson Oliver Noyes. He is survived by children Paul Seibert (Gina), Christine Noyes, Thomas Seibert, Daniel Seibert (Melanie) and Susanne Rising; grandchildren Audrey Noyes, Timothy Seibert(Jennifer) Jonathan Seibert(Kristen), Avery Noyes, CJ Oechsle (Nicole), Maura Seibert, Cecilia Rising, Joachim Rising, Mark Rising, Fiona Seibert; great grandchildren Nathan Seibert, Matthew Seibert, and Abigail Seibert. Like his favorite Pontiff John Paul II, Edward happily embraced his suffering to remind him of the privilege of life. A viewing will be held at Frampton Funeral Home in St. Michaels, MD from 4-7 pm on Friday, September 6, 2019. A funeral Mass will be held at Sts. Peter and Paul Catholic Church in Easton MD at 10:30 am on Saturday, September 7, 2019. A graveside service will follow at Old St Joseph’s Church in Cordova, MD. In lieu of flowers, donations may be made to St. Vincent de Paul Society or the Alzheimers Association.

The family of Edward Francis Seibert created this Life Tributes page to make it easy to share your memories.