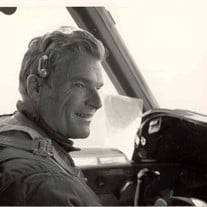 Vice Admiral Edward C. Waller, USN (Ret.) passed away peacefully on March 2, 2021, at the age of 95 at the home of his daughter in Annapolis, MD. He led a rich and wonderful life that included his best friend, for nearly 63 years until her death in 2013, his wife, Margaret "Marty" Clifford Gelly of Brentwood, CA and his children, grandchildren and great grandchildren. He was born in Chicago, Ill, the son of Edward C. Waller, Jr and Miriam Hall Waller. He was raised by his mother's sister, Marcia Hall, and her husband, Louis D. Millen in Coronado, CA. His affection for the guidance and love showered on him by Louis Millen was never forgotten and he credited him for his many successes in life. Ed graduated from Coronado High School in 1944 and enlisted in the U.S. Navy. He attended the Naval Academy Preparatory School in Bainbridge, MD and graduated from the U.S. Naval Academy in 1949 with a degree in Electrical Engineering. He reported to Pensacola, FL for flight training and received his wings in March 1951. Ordered to Patrol Squadron 50 in September 1951, he made two deployments in support of the Korean War. In 1954 he entered the U.S. Naval Postgraduate School in Monterey, CA and obtained a BS in Aeronautical Engineering in 1956 and a MS Electrical Engineering in 1957. After a tour in Key West, FL, he attended the Naval War College in Newport, RI and then reported to VP-48 in Coronado where he helped introduce one of the first modernized airborne ASW systems to the Pacific Fleet. Admiral Waller graduated from the Naval Test Pilot School in Patuxent River, MD in 1963 where he received the Navy League Award as the outstanding student for his class. He then became the Program Officer for the Air ASW Weapons System Project which led to the development of the P3C and S3A. His final two year at the Patuxent River Naval Air Station, he was the Executive and Commanding Officer of VP-44. Admiral Waller was then assigned at the Pentagon having primary responsibility for the P3C development. In 1970, after graduation from the Industrial College of the Armed Forces, he assumed command of the Amphibious Cargo Ship USS Charleston and took the ship around world delivering the first Seabees and construction materials to the island of Diego Garcia in the Indian Ocean. Having been promoted to Rear Admiral in 1971, his flag rank jobs included: Commander Fleet Air Wings Pacific, command of the ASW Systems Project Office and head of ASW Division, OPNAV. He was appointed Vice Admiral in 1975 and was named Director Weapons Systems and subsequently appointed Director, ASW and Ocean Surveillance Programs and then Commander, U.S. Third Fleet in Pearl Harbor in 1979. On August 22, 1981, he became the 50th Superintendent of the U.S. Naval Academy. Admiral Waller retired from the Navy on September 1, 1983 and joined the Lockheed-California Company in 1984 and in 1986 was named Vice President and General Manager-Government Programs followed by an appointment as Vice President ASW Systems, Lockheed Corporation. Since retiring from Lockheed in 1991, he consulted and served on the Board of Directors of a high technology company in the Washington, DC area. He and Marty moved back to their beloved home, Solitude, in St. Michaels, MD in 1988 and spent 25 years living on their 10 acre waterfront estate in an historic home welcoming children, grandchildren and great grandchildren, other family and friends to visit. They traveled extensively together or with friends and thoroughly enjoyed their retirement years together. Until Marty's death, they would spent an hour and a half each evening having dinner together talking about the day's events as they both were very busy with home projects, volunteer jobs and social engagements. In spite of Ed's tremendous professional successes, early familial challenges in his youth made his wife and children his number one priority. His very happy marriage and loving partnership with his wife and his hands-on job as dad was a wonderful example for his children who throughout their teen and early adult lives, he sent many letters of guidance and wisdom. In addition to his wife, Admiral Waller was preceded in death by a daughter, Kristen Leigh Waller in 1987 and his sister, Mary Waller Taylor. Survivors include his daughter and son-in-law, Robin and John Marrah of St. Michaels, MD; son and daughter-in-law, Ed and Penny Waller of Ponte Vedra Beach, FL; and daughter and son-in-law, Peggy and John Wilckens of Annapolis, MD; 12 grandchildren and 19 great grandchildren. Four of his great grandchildren are named for him and have either Carson or Waller as first or middle names. And seven of his children, grandchildren or their spouses followed his footsteps and served in the U.S. Military: Navy, Marine Corps, and Air Force. Due to current Covid restrictions the Memorial Service will be on October 4, 2021 10:30am, at the U.S. Naval Academy Chapel followed by his burial at the Naval Academy Cemetery. In lieu of flowers, memorial contributions may be made the U.S. Naval Academy Foundation (usna.com/donate). Arrangements are by the Framptom Funeral Home- Ostrowski Chapel, St. Michaels (www.framptom.com)

Vice Admiral Edward C. Waller, USN (Ret.) passed away peacefully on March 2, 2021, at the age of 95 at the home of his daughter in Annapolis, MD. He led a rich and wonderful life that included his best friend, for nearly 63 years until her... View Obituary & Service Information

The family of Edward Carson Waller III created this Life Tributes page to make it easy to share your memories.