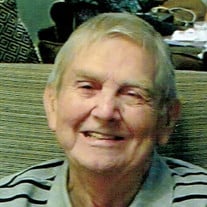 Edwin Kenneth Prettyman, 88, of Seaford, Delaware passed peacefully at home on Thursday, April 9, 2020 surrounded by family. He was born November 1, 1931 in Milford, Delaware. Ken was in the Army and Army Reserves reaching the rank of Captain. He spent his entire career designing and selling material handling systems for the plastics industry. He loved it so much that he ran his own company, Coast Equipment & Services during his retirement years. His greatest joy was spending time with his wife, Ruth, and family. Ken and Ruth recently celebrated their 65th wedding anniversary. One of his talents was writing poems. Here is our poem to him: Ken might have been taken from us, but he will never be gone Because he remains in the memories that all of us have drawn But most importantly he is reflected in the loving family he created A point that I believe simply cannot be debated Ken was a veteran of this country, a servant to his fellow man A trait reflected in his eldest, Cheryl, with her eternal volunteer plan Ken was a hard worker, building his business from the ground A trait reflected in his daughter, Amy, who stood by him through it all, with diligence so sound Ken was also an amazing father, raising his children to do great things A trait reflected in his son, Tom, who lovingly prepares his kids for whatever life brings Ken was a fighter, pushing through a lot of illness in his time A trait I know was reflected in his daughter, Lorrie, as we were all bewildered by her climb Ken was also a loving husband, thankful to the woman who helped create this life That love will always be reflected in Ruth, his beautiful wife Ken enjoyed being around every member of his family and for them, felt so much love A trait reflected in his grandchildren who know he’s now guiding us from above So, Ken may have left this earth, but I hope we all feel no sorrow Because as long as we have our family, these pieces of him will be back again tomorrow For now, I hope heaven has a version of his favorite brown recliner chair And he can just rest easy with Lorrie and wait for the rest of us up there Ken was dearly loved and will be greatly missed by his wife, Ruth (Paskey), his children Cheryl (Carl) Smith, Amy (Chris) Evans, and Tom (Ursula) Prettyman, grandchildren Megan (Jess) Polak, Matthew (Ashley) Smith, Maxwell and Madison Evans, Nicolas and Audrey Prettyman, and great-grandchildren Cole, Claire, Jonah, and Eliza Polak, and Adalynn Smith. He was preceded in death by his daughter, Lorrie Ann Prettyman, parents, Edwin and Helen (Clifton) Prettyman, and sister, Betty Winebrenner. Due to COVID-19, services are private. A celebration of Ken’s life will be held at a later date. Arrangements are by Frampton Funeral Home in Greenwood, Delaware. In lieu of flowers, contributions in memory of Ken may be made to the Vitas Community Connection, P.O. Box 645352, Cincinnati, Ohio 45264-5352.

Edwin Kenneth Prettyman, 88, of Seaford, Delaware passed peacefully at home on Thursday, April 9, 2020 surrounded by family. He was born November 1, 1931 in Milford, Delaware. Ken was in the Army and Army Reserves reaching the rank of... View Obituary & Service Information

The family of Edwin Prettyman created this Life Tributes page to make it easy to share your memories.