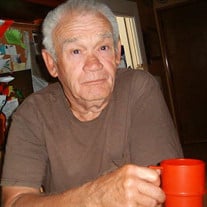 Elijah “Leroy” Wheedleton, 72, was born August 13, 1945. He went to be with the Lord, surrounded by his family and beloved dog Freckles, on Tuesday, December 5, 2017 at his home in Galestown, DE. He was the son of the late Elijah W. Wheedleton and the late Hazel Louise Craft Wheedleton. He joined the Navy in January of 1963. During his time in the Navy, Leroy served at number of different locations before retiring in 1981to become a waterman. He was a member of the Sharptown American Legion, VFW Post 5246, and the Fleet Reserve Association. In addition to his parents, he is preceded in death by a son, Patrick C. Wheedleton. He leaves to cherish his memory, his wife, Nancy Wheedleton, two daughters, Hazel Louise Harding (Jeff), and Brenda Lee Marvil (Ronnie), four grandsons, Joshua Adam Harding (Jennifer), Brandon Lee Harding, Ryan Scott Marvil, and Daniel Robert Marvil, one great-grandson Elijah August Harding, and two brothers, Charles Edward Wheedleton (Deborah), and William W. Wheedleton (Elaine), and a sister, Mary Ann Whitby. A memorial service will be held at 1:00pm on Monday, December 11, 2017 at Framptom Funeral Home in Federalsburg, MD, with Pastor Mark Brumley officiating. A visitation will be held from 12:00pm-1:00pm prior to the start of the service. Inurnment will be held at the Maryland Eastern Shore Veteran’s Cemetery in Hurlock, MD with a reception to follow after. In lieu of flowers, memorial contributions can be made to Vitas Healthcare, 100 Commerce Dr. Suite 302, Newark, DE 19713.

The family of Elijah "Leroy" Wheedleton created this Life Tributes page to make it easy to share your memories.