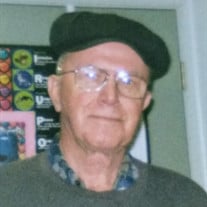 Elmer Cleveland Clouser, Jr. passed away on Tuesday, March 24, 2020 at Life Care at Loftland Park in Seaford, DE. He was 86. He was born on September 7, 1933 in York, PA, the son of the late Elmer Cleveland Clouser, Sr., and Isabella Wilders Clouser. After his education, he enlisted in the United States Army from 1956-1958. After he returned home, he worked as an electrical inspector. He was a member of the Denton Post #29 American Legion, and the Democratic Club in Baltimore for many years. He is survived by a son, Glen Clouser and his wife Tammy of Laurel, a daughter Cynthia Rosen of Baltimore, Maryland, two step children Sandra Champlin and Elmer Cleveland Clouser, II (Buster); four grandchildren, Raymond Rosen, Chase Rosen, William Clouser and Josiah Clouser and one sister, Myrtle Almony. In addition to his parents, he was preceded in death by a grandson, Chad Clouser. Due to restrictions set by our government, services will be private. Interment will be at the Delaware Veterans Cemetery in Millsboro. I Expressions of sympathy may be made to the Greenwood Vol. Fire Co, Post Office Box 1, Greenwood, DE 19950 or to the Wounded Warrior Project, Post Office Box 758516, Topeka, Kansas 66675-8516

The family of Elmer Cleveland Clouser, Jr. created this Life Tributes page to make it easy to share your memories.