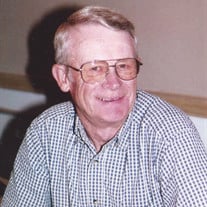 Elmer Ernest Franz of Federalsburg passed away on Sunday, June 10, 2018 at the Methodist Manor House in Seaford, DE. He was 82. He was born on June 3, 1936 in Williamsburg, Maryland, the son of the late Henry Franz and his wife Hilda Bee Kern Franz and Anna Mae Jump Franz Shufelt, and her husband Lee Shufelt. After attending school in Hurlock, he served in the United States Army from September 29, 1954 to September 27, 1957 serving with the Army Security Agency (ASA). After his honorable discharge, he married Verthea Ann Gang on June 21, 1959 and they made their home in Federalsburg. In 1975 they moved into their home that Elmer built with the help of his father. Elmer started his life long career at E.I. DuPont in Seaford, Delaware. He retired after thirty-seven years of faithful service. Elmer loved to be outdoors. He loved to go to the family farm cutting wood, fishing and hunting. He often helped with the Federalsburg Soap Box Derby with in the early years, and later when his grandchildren participated in the race. He was a life time member and trustee of the Federalsburg Volunteer Fire Company, and a lifelong member and trustee of Union United Methodist Church in Federalsburg. He is survived by his wife, Ann Franz of Federalsburg, two daughters, Traci Franz-Corbin of Easton and Susan Paige Franz of Toronto, Ontario., two grandchildren, Rowan A. Corbin and Benjamin Alan Corbin, two step sisters-in-law, Helen Kern and Diane Kern both of Seaford, DE. In addition to his parents and step parents, he was preceded in death by two step brothers, John and Jerome Kern. Funeral services will be held on Monday, June 18, 2018 at 1:00 at Union United Methodist Church in Federalsburg with the Reverend Dan Gedman officiating. Interment will follow at Hill Crest Cemetery in Federalsburg. A viewing will be held from 11:00 to 1:00 Expressions of sympathy may be made to the Federalsburg Volunteer Fire Company, Post Office Box 99 Federalsburg, MD 21632 or to Union United Methodist Church, 301 North Main Street, Federlsburg, MD 21632 or to the Talbot Humane Society, Post Office Box 1143, Easton, MD 21601 Share memories with the family at www.framptom.com

Elmer Ernest Franz of Federalsburg passed away on Sunday, June 10, 2018 at the Methodist Manor House in Seaford, DE. He was 82. He was born on June 3, 1936 in Williamsburg, Maryland, the son of the late Henry Franz and his wife Hilda Bee... View Obituary & Service Information

The family of Elmer Ernest Franz created this Life Tributes page to make it easy to share your memories.

Elmer Ernest Franz of Federalsburg passed away on Sunday, June...