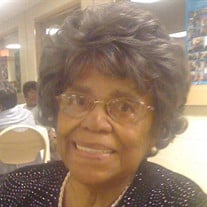 Elsie Elinore Jones Frazier, daughter of the late Reverend Ralph Wood Jones and Nora Ann Sharp Jones was born on January 4, 1920. She went home to be with her Lord on November 12, 2017 at Caroline Nursing and Rehab Center in Denton, Maryland. She was 97 years old. Elsie was educated in Caroline County Public Schools and began her education at Jonestown Elementary. She graduated from Lockerman High School in Denton, Maryland on May 21, 1937. She was salutatorian of her class. She gave her life to the Lord at an early age at Coppins AME Church in Preston, Maryland where she was very active in church ministries. Later in life, as an adult, Elsie made the decision to join T.M. Farmer Memorial Church of God In Christ. As a member of Farmer Memorial, Elsie continued her devotion to the church through participation in a variety of ministries. She was the church mother for many years and was later honored with emeritus status. She also served as YPWW teacher, a Bible Band teacher, Sunday School teacher, church secretary, Women’s Department State secretary, and assumed a leadership role with the Sunshine Band and Purity often transporting not only her children but other children to church services in Salisbury as well. She was also a missionary. On June 8, 1942 Elsie married the late James Francis Frazier, who preceded her in death on January 10, 2001. Through this union, she gave birth to three children, Lenora, Beverly and Marvin. Upon giving birth to her first child, she decided to take a break from her job at Hurlock Sportswear so that she could devote her total attention to raising a family. Elsie spent the next ten years of her life making sure that her children received proper training in their early years. During this ten year break, Elsie volunteered periodically in the classroom at Jonestown Elementary and served as the PTA secretary. The religious instruction of her children was also very important to her. She made sure they learned to pray, to read their Bible, to sing hymns, go to church and participate in church activities at Coppins AME and T.M. Farmer Memorial. She read Bible stories to them nightly. When the need arose for discipline, she applied it but her correction always included an appropriate Bible verse. After ten years of devoting time with her family, Elsie returned to work at Hurlock Sportswear ultimately working at that business for twenty plus years until her retirement at the age of 65. Elsie loved music and loved to sing. She could play piano by ear and made sure that each of her children learned to play an instrument. She could sew and often made clothes for her girls and her nieces or crocheted hats, vests and Afghan blankets. She also made ceramics. She loved to cook and some of her specialties were sweet potato pies, fudge, cookies, sauerkraut salad, and Watergate salad. She loved to write and kept numerous journals. She also loved poetry and could recite many poems directly from memory. Elsie leaves to cherish her memory one sister, Dorothy Burns, three children- Lenora Frazier Horne (Gregory), Beverly Frazier O’Neal (Pete) and James Marvin Frazier. She leaves three grandchildren- Peter James O’Neal (Chantal), Patrick Jerome O’Neal (Genevieve) and James Martell Frazier. Also remembering her are her great grandchildren Jamal Bradley, Christian Bradley, Quran Berry, JaMaz Frazier, Aziyyre Newcomb, JaMauri Holland, Janasia Elliott, a host of nieces and nephews and one godchild/niece and namesake Elsie Frazier Spruill. Elsie was preceded in death by her parents Ralph and Nora Jones, her husband, James Frazier, her sisters Sarah Collins, Bertha Kinder, beloved little sister Rosetta Johns, her brother Ralph Jenkins Jones, a nephew Reverend Marshall Collins, and a niece Patricia Johns King. Six other siblings died in infancy. A funeral service will be held on Saturday November 18, 2017 at 11:00am at T.M. Farmer Memorial Church of God in Christ, with Elder Allen Cork Sr. officiating. Friends may call on the family on Friday November 17, 2017 from 5:00-7:00pm at T.M. Farmer Memorial Church of God in Christ or Saturday from 10:00-11:00am directly before the service. Services entrusted to the Framptom Funeral Home. Share memories with the family at www.framptom.com.

Elsie Elinore Jones Frazier, daughter of the late Reverend Ralph Wood Jones and Nora Ann Sharp Jones was born on January 4, 1920. She went home to be with her Lord on November 12, 2017 at Caroline Nursing and Rehab Center in Denton, Maryland.... View Obituary & Service Information

The family of Elsie Jones Frazier created this Life Tributes page to make it easy to share your memories.