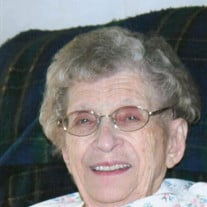 Emilie "Millie" Kucek Schmick peacefully passed away on Tuesday, December 7, 2021 at the glorious age of 97. Formally of Federalsburg, Maryland, Millie had resided in Virginia Beach, Virginia for the last ten years. Millie was born in Newark, New Jersey on August 14, 1924 to Czechoslovakian immigrant parents, Eva and Stephan Kucek, who came through Ellis Island to settle in America. She graduated from Dover High School in 1942 and started her working career. While attending a Walther League youth meeting at her church, she met her future beloved husband, Carl. After their marriage on November 1, 1947, she began working and settling into her home in Federalsburg. A mother of three, she was a stellar homemaker. She was often found at her Necchi sewing machine making clothes for her children and many dresses and suits for herself. Her favorite place, though, was in the kitchen-cooking, canning, preserving, and freezing. But her "love" was in baking desserts-cookies, cakes, pies, yeast breads and her infamous "sticky" buns. Never was there a time that company didn't have a plethora of sweet treats offered to them. She was truly an "Entenmann's" of her time, and her treasured collection of recipes numbered in the hundreds. Not only did Millie enjoy making a home for her family, but also, she was a caretaker of her failing mother for seven years and a caretaker of her daughter for most of her daughter's life. Always willing to help, she assisted elderly women in the community by offering home cooked meals, transporting them to church, and popping in to see if they needed anything. Millie was a member of the Immanuel Lutheran Church in Preston, Maryland. She was a member of the Ladies Aid Society of the church and also acted as treasurer of this society for several years. As her husband served during the war, she was also involved in activities at the VFW Post #5246 in Federalsburg. She loved reading the Wall Street Journal from front to back, and enjoyed the challenged of investing in the stock market. Although Millie enjoyed a simple, quiet life, she also worked in different capacities, such as the local Tastee Freez, a vending machine company, and Solo Cup. She is preceded in death by her parents, Eva and Stephan Kucek, her husband, Carl Herman Schmick, her twin brother Emil Kucek, and her daughter, Margie Ann Schmick. She is survived by her son Stephen E. Schmick of Denton, Maryland and daughter Pauline S. Heath and husband Will of Virginia Beach, Virginia, nieces, nephews and their families, and friends. Funeral services to celebrate her life will be held at 12:00 p.m. Tuesday, December 14 at the Immanuel Lutheran Church in Preston, Maryland with Pastor David Casey-Motley presiding. Family will receive friends at the church prior to funeral services from 11:00-12:00. In lieu of flowers, donations in her memory can be made to the church.

Emilie "Millie" Kucek Schmick peacefully passed away on Tuesday, December 7, 2021 at the glorious age of 97. Formally of Federalsburg, Maryland, Millie had resided in Virginia Beach, Virginia for the last ten years. Millie was born in Newark,... View Obituary & Service Information

The family of Millie Schmick created this Life Tributes page to make it easy to share your memories.