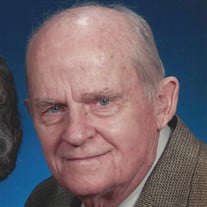 Ernest Harry (Bob) Plutschak, 90, of Easton, MD, (formerly Hurlock, MD) passed away on September 7, 2018, at Bayleigh Chase Assisted Living – The Gardens, as a result of mesothelioma. Born on February 18, 1928, in Preston, MD, he was the youngest son of Edward Herman Plutschak and Augusta Kleinschmidt Plutschak. He married Janice Doreen Hubbard on August 6, 1960, and they shared 58 years of marriage. They resided in Hurlock for 56 years, then relocated to Bayleigh Chase. Bob Plutschak attended Preston School (grades 1-12), Goldey-Beacom College, University of Maryland (B.S. 1952), and Salisbury State College (M.S. 1975). As a boy, he worked on the family farm in Preston. He served in the U.S. Navy from 1946-48 and was aboard the USS Quirinus ARL39/Y3. Mr. Plutschak was employed for 32 years by the Dorchester and later Caroline County Boards of Education. He began his teaching career in 1954 at North Dorchester High School; the remainder of his career was in Caroline County. He taught physical education, science, and business subjects, as well as coaching several sports, concluding his career in the elementary classroom. He implemented the first elementary physical education program in this area at Greensboro School during President Kennedy’s emphasis on physical fitness. Mr. Plutschak also taught in the Migrant and CETA Programs during the summer. In retirement, he worked in sales, delivery service, and agriculture. Mr. Plutschak was a member of Immanuel Lutheran Church in Preston, participated in the Adult Choir, and served on the Board of Elders. He was a member of the Maryland and Caroline County Retired School Personnel, AARP, National Rifle Association, and Varmint Hunters Association. Bob enjoyed hunting for groundhogs and keeping a record, fishing, quail hunting, crow shooting, and owning and training hunting dogs. His hobbies included listening to classical music and rooting for the Maryland Terrapins and the Washington Redskins. He played on a local softball team into his 40’s and remained strong and active into old age. Bob Plutschak is survived by his wife Janice of Easton and daughter Paula C. Nelson (Gene) of Honey Brook, PA, as well as sister-in-law Rosalie Sard, three nieces, and eight nephews. He was preceded in death by his brothers Gus, Paul, Herman, Bill, Carl, and Elmer (Buddy) Plutschak; and his sisters Agnes Dietrich, Louise Wright, Alma Burkett, Hilda White, Clara Tjaden, Lily Harper, and Mabel Cole. Services will be held at 11:00 AM on Thursday, September 13, at Immanuel Lutheran Church, Preston, with Rev. David Casey-Motley officiating. Burial will be held on Friday, September 14, at MD Veterans Cemetery in Beulah at 12pm. Visitation will be Wednesday evening, September 12, from 6:30-8:00 pm at Framptom Funeral Home, Federalsburg, and one hour prior to the service at the church. Memorial donations may be made to Immanuel Lutheran Church, P.O. Box 39, Preston, MD, 21655, or to Talbot Hospice, 586 Cynwood Drive, Easton, MD, 21601.

The family of Ernest "Bob" Harry Plutschak created this Life Tributes page to make it easy to share your memories.