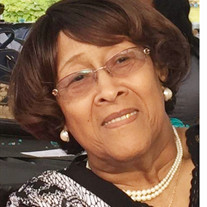 Essie Marie Batson-Cephas of Hurlock, Maryland departed this life on Sunday, October 6, 2019, at her home in the presence of her loved ones. She was 80 years old. Essie was born in Seaford, DE on April 22, 1939, to the late George Batson and Lula Matthews Batson-Camper. She received her education from Sussex County Delaware schools and graduated from Frederick Douglas High School. Upon graduation, she entered the workforce as a seamstress at the Sewing Factory in Hurlock, MD. She later went to work for the Poultry Plant currently known as Amick Farms where she retired after 35 years of dedicated service. During her tenure there, she met the love of her life, William Cephas and after 18 years of courtship, they officially tied the knot on October 7, 1989. After retirement, she worked as a caregiver on a part time basis for Dr. Hill and his wife until their passing. Essie enjoyed cooking, cleaning, dancing, singing, shopping and most importantly, spending quality time with family and friends. She was a member of Mt. Zion United Methodist Church in East New Market, Maryland under the direction of Pastor Ashley L. Jones. Essie was the epitome of the word “Nurturer”. She loved family and devoted her time to ensuring that everyone was doing “okay”. She was known for popping up at a loved one’s home for a surprise visit in the event that she hadn’t heard from them for an extended period of time. Her beautiful smile and infectious laugh were guaranteed to brighten the gloomiest of days. Although her death leaves an unfillable void, knowing that there is no more pain or suffering will help heal the hurt from her absence. She will be missed by countless people. To know her was to definitely love her. She leaves to mourn, her husband of 30 years, William Cephas, loving children: Granival Batson Sr. (Deborah), Thomas Batson, Ondrey Batson, Carlessa Jolley (Troy), and Willanda Jenkins (Phillip), a Step-daughter, Shirley Luke-Peterson (William Sr.), 18 grandchildren, 37 great grandchildren, Siblings: Sylvia Bode (Doc), Carmel Banks, Dorakay Elliott (Thomas), In-laws: Brenda Batson, Brenda Wilmer, Gloria Greene (David), Douglas Cephas (Eve), Jerome Cephas (Rose) Cynthia Chester (Nathaniel) and Margaret Hubbard (Lorenzo), her God-daughter, Laura Demby-Collins, a host of nieces, nephews, cousins, friends and many “honorary children” who considered her like a Mom. She also leaves to cherish their many years of friendship, her special “sister” Gwendolyn Weal. Due to the untimely passing of her sister Pauline, Essie stepped up to the plate and became the guardian of her children and assisted in raising them as her own. They are: Jacqueline Camper-Hughes (Kevin), Tamara Dobson (Douglas), Rosalind Chester (Carroll), Franklin Milligan Jr. (Veronica) and Wanda Milligan-Hughes (Anthony). Essie was preceded in death by her parents, her Step-father Charles Camper, her first husband, Thomas Jolley, a daughter June Arshad, a grandson William Peterson Jr., and siblings, Frederick Batson, Betty Robinson, Pauline Camper-Milligan, and Yvonne Tribbett. A funeral service will be held on Saturday, October 19, 2019 at Hurlock United Methodist Church in Hurlock, Maryland at 12pm. The family will begin to receive friends at 11am. Interment will be held at Thompsontown Cemetery in East New Market, Maryland immediately following the service. Services are entrusted to the Frampton Funeral Home Share memories with the family at www.framptom.com

Essie Marie Batson-Cephas of Hurlock, Maryland departed this life on Sunday, October 6, 2019, at her home in the presence of her loved ones. She was 80 years old. Essie was born in Seaford, DE on April 22, 1939, to the late George Batson... View Obituary & Service Information

The family of Essie Marie Cephas created this Life Tributes page to make it easy to share your memories.