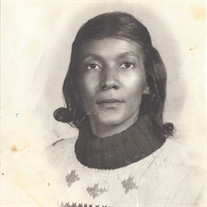 Ethel Mae Griffin, passed away on Thursday, September 28, 2017 at her home in Laurel, DE. She was 89. She was born in Laurel, DE, on April 23, 1928, the daughter of the late William Anderson Stewart and the late Louise Shelton Stewart. She was preceded in death by her husband Clarence Roland Griffin, Sr. She was known fondly as "Mom Mom Cook" and was very well known for her fabulous cooking. She was a quiet, but stern woman with a strong will. She was very wise and was often sought for advice from friends and family. She was always helping raise money and would often cook to help in any fundraising efforts in support of her family and church. She attended St. Matthews for over 20 years as well as a member of Storm Shelter Ministries both in Laurel, DE. She was also preceded in death by a son, Clarence Roland Griffin, Jr. , two brothers, William Stewart Jr., and Alfonzo Stewart, three sisters, Ann Armstrong, Helen Holden, Emogene Custis, and four grandchildren, Nanette Griffin, Brian Owens, Ja'Quan Griffin, and Roland Griffin, and two sons-in-law, Raymond Gregg and William Winder. She leaves to cherish her memory, her children, Penelope Y. Duncan (Maurice) of Delmar, DE, Danny Stewart (Ella) of Wilmington, DE, Dorthea Winder of Seaford, DE, Tyrone E. Griffin (Frankie) of Dover, DE, Valerie Gregg of Laurel, DE, Byron Griffin of Salisbury, MD, 28 grandchildren, 34 great-grandchildren, and 14 great-great-grandchildren, and a sister, Corrine Wade of Waterbury, CT and a host of nieces,nephews, cousins, and extended family. Funeral Services will be held at Citadel of Hope in Seaford, on Saturday, October 7, 2017 at 12 noon with a visitation from 10:00 am-12:00 pm at the church. Interment will follow at St. Matthews First Baptist Church Cemetery in Laurel, DE.

Ethel Mae Griffin, passed away on Thursday, September 28, 2017 at her home in Laurel, DE. She was 89. She was born in Laurel, DE, on April 23, 1928, the daughter of the late William Anderson Stewart and the late Louise Shelton Stewart. She... View Obituary & Service Information

The family of Ethel Mae Griffin created this Life Tributes page to make it easy to share your memories.