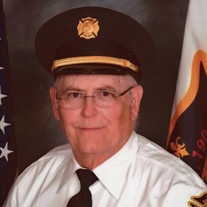 ST. MICHAELS - Eugene M. Messick III of St. Michaels died Sunday, March 6 at his home at the age of 75. He was born on September 10, 1946 in Salisbury and was the son of the late Eugene M. "Bud" Messick, Jr. and Ruth Kennerly Messick. After graduating from the Capitol Institute of Technology in Washington DC, he began his 37-year career with Delmarva Power. Upon his retirement, he joined the St. Michaels Volunteer Fire Department where he was active until his death. He was also a volunteer at the Classic Motor Museum. He met Bonnie at Delmarva Power and they were married on October 5, 1987. Gene loved classic cars, music, Ham radio and anything that produced static and muffled noise. He was very proud of the fact that he got his Ham license at the age of 14. Gene took flying lessons and later flew his own plane. He enjoyed travel but especially loved the annual vacations to Graves Mountain Lodge in the Blue Ridge where he and Bonnie made lasting friendships with people they met there. In addition to his wife, he is survived by a daughter, Joy Elizabeth Messick of Cambridge and two step-children Carrie H. Kennedy of Pensacola, FL and Don G. Hill of Anacortes WA; two brothers, Michael Messick (Donna) of Salisbury and Jon Messick of Colorado; twin sisters, Betty Messick of Salisbury and Nancy Evans-Messick of Owings Mills; three nieces, Jennifer Pflaumer (Rob) of Ocean Pines, Julie Parsons (Aaron) of Edgewood and Briana Boehmer (Michael) of Colorado; his brother-in-law Capt. Bobby Marshall of McDaniel; sister-in-law Kate Benton of Colorado; three nephews, Asa Reeves and Max Benton of Colorado, and Ian Scofield of California; and a niece, Sammy Marshall of McDaniel. He also claimed many of Bonnie's other relatives as his own. A memorial service will be held at 1 p.m. on Saturday, March 19 at the St. Michaels Volunteer Fire Department, 1001 S. Talbot Street, St. Michaels, MD. Memorial donations may be made to the St. Michaels Fire Department, Inc., 1001 St. Talbot Street, St. Michaels, MD 21663 or Talbot Hospice, 586 Cynwood Dr., Easton, MD 21601. Arrangements made by Framptom Funeral Home- Ostrowski Chapel, St. Michaels, MD 21663.

ST. MICHAELS - Eugene M. Messick III of St. Michaels died Sunday, March 6 at his home at the age of 75. He was born on September 10, 1946 in Salisbury and was the son of the late Eugene M. "Bud" Messick, Jr. and Ruth Kennerly Messick. After... View Obituary & Service Information

The family of Eugene Maurice Messick III created this Life Tributes page to make it easy to share your memories.