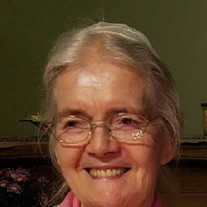 Evelyn Fern Benner Swartzentruber passed away May 8, 2021 at the home of her daughter, Ruth Ann Hays. She was 93. She was born March 16, 1928 in Onego, West Virginia to the late Rhine and Anna Stoudt Benner. After graduating high school from Eastern Mennonite School, Evelyn helped several of her siblings at the birth of some of their children. While living with her brother Millard and his wife, Lura, in Delaware, she worked at the shirt factory and in the nursery at Milford Memorial Hospital. During the time she lived in Delaware she met Lewis Swartzentruber whom she married on October 23, 1949. They made their home in Greenwood. She helped with summer Bible school and taught Sunday School for a number of years. She helped Lewis with his farm work, driving tractor, and moving equipment from field to field. She assisted in his small farm supply business, waiting on costumers, and answering phone calls. From the acre patch of peppers she picked many a bushel. She and Lewis gave a home and cared for Charlie Moore for many years. She also sat with the elderly. She had a big vegetable garden and loved her flowers. She lovingly took care of her family, baking her famous "spread cookies" at the last minutes on numerous occasions. She often hummed as she did her house work and cared for her children and grandchildren. She enjoyed playing games and in later years crocheted many afghans. She is survived by two daughters, Fern (Maynard) Baker of Bassett, VA, and Ruth Ann (Steve) Hays of Greenwood, DE, and one son, John David (Carlene) Swartzentruber of Greenwood, DE, and a daughter-in-law, Connie Holmberg (Skip) of Greenwood, DE, 13 grandchildren, 38 great grandchildren, and 1 great-great grandchild, 1 brother Daniel (Florence) Benner, of Rockingham, VA, 1 Sister-in-law, Marjorie (Truman) Swartzentruber Schrock of Greenwood. After 70 years of marriage , her husband, Lewis, preceded her in death. She was also preceded in death by her parents, and her son, Daniel, 3 brothers, James, Timothy, and Millard, and 2 sisters, Elva, and Rhoda, and 5 infant siblings. Funeral services will be held on Friday, May 14, 2021 at 2:00 at Greenwood Mennonite Church. Burial will follow in the adjoining cemetery. The family will receive friends from 6-8 on Thursday evening at the church. There will be opportunity to view the body one hour before the service. In lieu of flowers, expressions of sympathy may be made to the Greenwood Mennonite Church Building Fund, Post Office Box 246, Greenwood, DE 19950.

Evelyn Fern Benner Swartzentruber passed away May 8, 2021 at the home of her daughter, Ruth Ann Hays. She was 93. She was born March 16, 1928 in Onego, West Virginia to the late Rhine and Anna Stoudt Benner. After graduating high school... View Obituary & Service Information

The family of Evelyn Swartzentruber created this Life Tributes page to make it easy to share your memories.

Evelyn Fern Benner Swartzentruber passed away May 8, 2021 at...