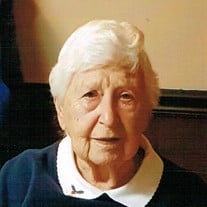 F. Elaine Jones formally of Greenwood, DE passed away on Monday, April 20, 2020 at the Genesis the Milford Center in Milford, Delaware. She was 92. She was born on December 9, 1927 in Chester, PA, the daughter of the late Wilbert Joseph and Edna Beck Joseph. She married Arthur Jones and they made their home in Greenwood. He preceded her in death on August 8, 2002 after 54 years of marriage. In addition to raising her family, Elaine worked in accounts payable at O.A. Newton for many years. She was a lifetime servant to the Greenwood community. She was a Memorial Charter member of the VFW Post #7478 of Greenwood since June of 1950, past President, Secretary and Treasurer, also served as the District Four treasurer for 44 years. She was a part of the committee that started cooking and serving barbeque on the corner many years ago. She earned the nickname “Sarg” from doing floor work with Helen Best in the Wilmington area. In addition, she served the Greenwood Vol. Fire Company Ladies Auxiliary since 1948, served as an officer for all but two years, served as secretary for 51 years and treasurer for the state for six years; President of Sussex County and later the State of Delaware from 1980-1981; served as a chairman of the dining room for many years, and served for the Chicken Barbeque as well as the fried oyster and chicken salad dinners over the years. She was a lifetime member of the Bridgeville BPN Sussex Chapter #7 Order of the Eastern Star of Seaford for more than thirty years. She loved cooking, playing cards with her friends and neighbors and spending time with her family and grandchildren. She is survived by a daughter, Susanne Foskey and her husband Cliff of Harrington, a daughter-in-law Robin Jones of Greenwood, a grandson, Chad Jones (Casi) of Greenwood, one great granddaughter, Aubrey Jones, a sister-in-law, Florence Jones of Greenwood, and two nieces, Dolores Slatcher of Seaford and Durene Jones of Greenwood and many other nieces and nephews. In addition to her parents, she was preceded in death by a son, Thomas Jones and a grandson, Zachary Jones. Because of the limitations of COVID 19, services will be private. A memorial service will be planned at a later date. Burial will be in St. Johnstown Cemetery. Expressions of sympathy may be made to the Greenwood Fire Company Ladies Auxiliary, Post Office Box 17, Greenwood, DE 19950 or to the Greenwood Memorial VFW Post #7478 Auxiliary, 102 Maryland Avenue, Greenwood, DE 19950. Services entrusted to the Framptom Funeral Home – Fleischauer Chapel in Greenwood. Share memories with the family at www.framptom.com

F. Elaine Jones formally of Greenwood, DE passed away on Monday, April 20, 2020 at the Genesis the Milford Center in Milford, Delaware. She was 92. She was born on December 9, 1927 in Chester, PA, the daughter of the late Wilbert Joseph and... View Obituary & Service Information

The family of F. Elaine Jones created this Life Tributes page to make it easy to share your memories.