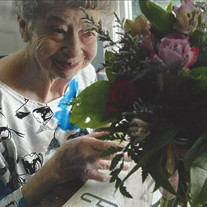 Frances "Dee" Spicer of Blades, DE passed away on Thursday, August 19, 2021. She was 85. She was born September 4, 1935, the daughter of the late Charles F. Noble, Jr. and Irene Frances Baker of Preston, MD. She was married to Lt. Robert Vernon Poore of Federalsburg, MD until his passing and later married James N. Spicer of Milford, DE and Mt. Joy, PA. She graduated from Hurlock High School with the class of 1953 and then graduated from West Virginia University with the class of 1960. She received her Master's Education at Washington College in Chestertown, MD as well as at University of Maryland. She went on to teach art in Pennsylvania, Ohio, and southern Caroline County. She retired from Colonel Richardson Middle school after teaching for over 25 years as a librarian and a teacher. Dee enjoyed entering the Adult Plus Art Shows at Delaware Tech in Georgetown where she won first, second, and honorable mention for her paintings in oils and watercolors. She also enjoyed going to the Nanticoke Senior Center in Seaford, DE and attending church with her son and daughter-in-law. She was proceeded in death by C. Fulton Noble, founder of the first Ford dealership (Noble Ford) in Preston, MD and Provident State Bank, having tomato canners at Friendship, MD and Cannon, DE and Cora Fischer Willis Noble. She was also preceded in death by her aunt and uncle, Charles A. Baker and Grace Coulbourne, her brother, Charles F. Noble III and his son, Kevin Charles Noble, and her mother and father. She is survived by her son, Steven Eric Poore and his wife Sharon Lea of Blades, DE, and her daughter Carolyn Dee Lewis and her husband Laird, four granddaughters, Amy Lyn Grimes-Plummer, Brittany N. Poore Clough, Lindsay B. Poore, and Taylor E. Short, two great-grandsons, Richard Boyd Lee Plummer and Junior Clough, and one great-granddaughter due in 2022, and one sister, Sue Noble Moran of Oak Grove, DE. A celebration of life will be held at Stein Highway Church of God in Seaford, DE on Saturday, August 28, 2021 at 1pm with Pastor Dan Southern officiating. In lieu of flowers memorial contributions may be made in Dee's name to Stein Highway Church of God, 425 E. Stein Hwy, Seaford, DE 19973. Share memories with the family at www.framptom.com.

Frances "Dee" Spicer of Blades, DE passed away on Thursday, August 19, 2021. She was 85. She was born September 4, 1935, the daughter of the late Charles F. Noble, Jr. and Irene Frances Baker of Preston, MD. She was married to Lt. Robert Vernon... View Obituary & Service Information

The family of Frances Dee Poore-Spicer created this Life Tributes page to make it easy to share your memories.